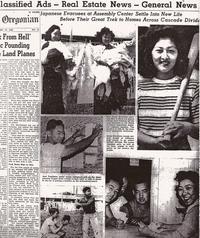 By Lawrence J. Maushard of Portland, Oregon. Lawrence is a journalist and author. Read more of his work at Observations & Anecdotes.

September's passing has witnessed yet another unrecognized anniversary of our city's landmark episode of wholesale ethnic cleansing which remains unequaled in Portland history.

September 1942 saw the close of the Portland Assembly Center prison camp when every local citizen and immigrant resident of Japanese ancestry was at last forced out, literally herded into decrepit rail cars for internal exile. They ended up in much larger prison detention camps throughout the desert regions of various Western states for the duration of WWII.

About half of the local deportees are said to have relocated elsewhere and never returned home.

September is forever seared into the memories of the remaining aged former internees – if not the general public – as a time when Portland finally and utterly turned its back on its own.

“They told us that we were going to go by train, and the train came right very close by (the Portland camp). I guess in those days the cattle or whatever were placed on the train and they went. So, under armed guard, we were transferred onto the train,” Sato Hashizume told interviewers in 2008 about the evacuation from her hometown to the Minidoka Relocation Center prison camp in southern Idaho.

Nearly 4,000 innocent men, women, children and seniors from Portland and beyond had been imprisoned behind the closed wire and the armed guards of the Portland Assembly Center – an Orwellian moniker if there ever was one – on the present-day site of the Expo Center from May through September in that first full year of U.S. involvement in the Good War.

Only there was no Expo Center back then. It was, in fact, the Pacific International Livestock Exposition. That's right, a cattle yard. The camp facilities were hurriedly constructed atop manure-laced soil that reeked throughout much of that long hot summer of '42.

Executive Order 9066 issued on February 19, 1942 by Franklin D. Roosevelt set off a series of actions ultimately forcing more than 110,000 Japanese and Americans of Japanese descent into isolated military-style camps in Western desert areas for the duration of the war. Prior to their final destinations, the internees from California, Oregon and Washington State were first ordered to report to temporary Assembly Centers, a total of 16 locations up and down the West Coast. The Portland Assembly Center was one of those feeder camps.

Conditions inside the Portland Assembly Center were cramped and spartan. "Six cots, that's all the furnishings there were. Six cots. No table, no chair, no nothing," Mae Ninomiya recalled several years ago about living quarters within the huge hall facility. She said that in their family "apartment," the cots took up all the floor space and were simply left open side by side both day and night. "At first we got mattress bags, and we had to fill them with straw." Mattresses were eventually distributed. As for privacy, "In our compartment, the wood partitions were, I think, 8 feet high and our doorway was a canvas bag."

June Arima Schumann, former Executive Director of the Oregon Nikkei Legacy Center, said several years ago, "What they did was take away the partitions of the animal stalls, swept away the manure on the dirt floor, laid rolls of 2x4s, and then put 1x10 or 2x10 boards across to make the floor. So people lived on top of what used to be where the manure was." She noted that a standard space for a family of four was 20x14 feet, with larger dimensions for bigger families. The canvas door coverings were purposely left several inches off the flooring, Schumann explained, "so officials patrolling the area could look into the unit."

Groups of internees from throughout the northwest regularly came into the Portland Assembly Center as others were shipped out to their final internment camp locations. In all, four deaths and 23 births were recorded at the Portland site, according to an Oregon State Archives exhibit. A medical facility was present, staffed by two interned doctors and four nurses.

Portland's modern-day reputation as a bastion of liberal thought and action may be well founded. But back during the war, the Rose City stood out as a hotbed of vicious racism that couldn't get the Japanese American population rounded up and booted from the city fast enough.

“The support for removal expressed at the Portland hearings was not atypical, but the Portland hearings (of the House Select Committee Investigating National Defense Migration — better known as the Tolan Committee) did differ from those held in San Francisco and Seattle in one important way — the absence of organized opposition,” wrote Ellen Eisenberg in “As Truly American as Your Son”: Voicing Opposition to Internment in Three West Coast Cities; Oregon Historical Quarterly, Vol. 104, No. 4, Winter 2003. “Small but organized groups opposing the removal participated actively in the San Francisco and Seattle hearings, but in Portland no organized group defended Japanese Americans or questioned the need for mass internment.”

This wasn't a city reluctantly following orders from Washington to carry out a noxious war-time directive. No, it was more like a town hell bent on proving its patriotic bona fides by unleashing its worst racist elements in a manner not far short of direct physical assault.

It appears that almost no one outside the Japanese American community itself was willing to make a public stand against the internments, no one except for Azalia Emma Peet of Gresham, according to Eisenberg. Only Peet, a Methodist missionary who had lived in Japan, apparently had the courage to publicly question the internments.

“These are law-abiding, upright people of our community,” Peet testified at the Tolan Committee hearings in Portland on Feb. 26, 1942, according to Eisenberg's account. “What is it that makes it necessary for them to evacuate? Have they done anything? Is there anything in their history in this area to justify such a fear of them developing overnight?”

During the first days of the Portland Assembly Center internment, The Oregonian went so far as to print a propaganda feature photo page of smiling young internees effortlessly going about their daily lives: hanging laundry, playing ball games, etc. One of those shown is Jack Yoshihara, who had been a sophomore on the 1941 Oregon State Beavers championship football team. But Yoshihara had not been allowed to play in the Jan. 1, 1942 Rose Bowl game due to wartime travel restrictions limiting Japanese Americans to 35 miles of their home.

So if you think that something like a targeted, organized and orchestrated campaign of radical ethnic cleansing by way of a government and media partnership could never happen here, think again.

And remember – especially in September when you hear the steel-on-steel shriek of forgotten rail cars purposely winding through the Marine Drive corridor in North Portland – that it already has.