The year's most ironic political outcome 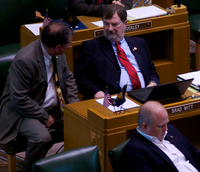 Lots of hair-pulling over the vote to approve the so-called “Monsanto Protection Act” during the special session. I’d like to talk about the upside of this bill and why those of us who are concerned about GMOs now have the upper hand because we lost this vote.

First, a bit of recent history on this bill. As SB 633, co-sponsored by Sen Arne Roblan, the bill passed the Senate 17-12. Dems voting No were: Bates, Burdick, Devlin, Dingfelder, Edwards, Hass, Monnes Anderson, Monroe, Prozanski, Rosenbaum, Shields, Steiner Hayward; Johnson, an “add-on” co-sponsor, was absent with her injury during that vote. The bill never came to a vote in the House; leadership blocked it. The same leadership that allowed the vote to move forward as part of the special session package made sure it did not get a vote that would have made it law earlier this year.

And according to Rep Michael Dembrow, speaking to constituents prior to the special session, the bill had majority support. I remember my anger at Co-Speaker Bruce Hanna using the same tactic to block Tuition Equity and the BPA “Sippy Cup” bill in 2011; it does not sit well with me to have this tactic used just because I support the outcome.

And we should note that Brad Witt, who voted yes on this bill during the special session, is Chair of the House Ag Committee; so I’m guessing it was Speaker Kotek and Dem Majority Leader Hoyle who blocked the vote in the House. It appears that while they voted Yes on the bill, they did so holding their noses. Part of the challenge of being in leadership is that sometimes compromise stinks.

The morally pure may now take a few moments to rend their garments and call down the wrath of their gods and/or goddesses on those who chose to compromise and support the Governor. I didn’t support any of the legislation during the special session but the state’s democratically elected chief-of-state wanted to achieve some goals, and Kotek and the rest of the Legislative leadership for the Dems gave him the support he needed. Even to the cost of their own standing among the base.

SB 633 was part of the session only because the Republicans demanded it. Gov Kitzhaber was not pleased:

"The random factor, the free radical, was the GMO bill, which I would be the first to acknowledge has nothing to do with the purposes for which I originally called the session," Kitzhaber said. "I wish I could tell you there was a rational reason for it to be in there, but there isn't — except apparently the Republicans needed it to get enough votes." [emphasis added]

The Republicans also demanded that the bill be given “emergency” status in order to block votes on GMOs in Lane and Benton Counties, as well as make a challenge via initiative more difficult. The January 2014 vote in Jackson County was exempted; even the pro-GMO forces in the GOP could see that stopping a vote that’s already scheduled would be horrible optics. But for the rest of the state, local control over GMO policy has now been removed.

Now the Dept of Agriculture is in charge of that policy.

And Brad Witt now has responsibility for legislative oversight of Ag. More on that below.

The Governor knew going into the session that significant anger existed among Dems over a bill popularly known as the “Monsanto Protection Act”, and he was ready with a response to that anger even before the session ended. As reported in the Oregonian,

In an Oct. 1 letter to Senate President Peter Courtney, D-Salem, and House Speaker Tina Kotek, D-Portland, Kitzhaber said he is directing the Oregon Department of Agriculture to map out where genetically engineered and non-genetically engineered crops are grown. The systems would allow growers to coordinate buffers and exclusion areas, he wrote.

The department will also submit an action plan by June spelling out what can be done on GMO regulations under existing rules.

"We will bring legislation to the 2015 session to address those issues," Kitzhaber said at a press conference Wednesday after the special session concluded.

This is where the loss can be turned around. As House Ag Chair Brad Witt pointed out to me in a phone interview (Friday, October 4), prior to this legislation, Oregon was facing the prospect of multiple and conflicting laws and rules regarding the planting of GMOs in Oregon.

And we’ll take a time-out here to note: GMOs are already grown in Oregon, and have been for decades. Witt pointed out corn, soy, sugar beets and canola as examples of genetically modified crops that are established parts of the agricultural economy. So this bill had nothing to do with stopping GMOs in Oregon; they are here, and they are not going away. What they will be, with this legislation, is controlled in a consistent manner throughout the state.

Which, after all, is how most Oregonians want government and law to function: consistently, fairly, and with legislative oversight. I attended and recorded the hearing on the Plastic Bag Ban in 2011, and that’s the argument made by the grocers who supported the bill: they wanted one policy to be applied throughout the state. The bill never escaped the Senate despite bi-partisan support in that chamber, and now Oregon has what the grocers feared: a hodge-podge of rules. So Portland and Gresham Fred Meyers stores have different rules for these bags despite being side-by-side and having an overlapping customer base. For Freddies, it sucks and costs them money (passed along, of course, to consumers).

When it comes to agricultural policy, the potential for a “hodge-podge” would have resulted in far worse than incovenience and added costs. Under the law before this bill, regulations on GMOs could have varied county-by-county. So one county might have allowed wide-opening planting of anything while a neighboring county opted for “pure” agriculture. But the lines between counties are artificial, so there would be nothing to stop cross-pollinating of organic crops by GMOs. Yet that’s exactly where we were headed.

Now the state can set policy and guidelines that will avoid this happening. This is exactly what Witt expects to happen. We already, according to the House Ag Chair, do this to avoid cross-pollination of standard crops; eg, to prevent various brassicas from interfering with each other. And while I’m confident that many GMO opponents look at the Governor, Ag Dept and all parties concerned with suspicion, if not hostility, there’s one key reason I believe Witt’s faith in this system is sound:

Yes, Monsanto and their ilk will continue to buy off the Oregon Farm Bureau, and they will attempt to influence legislators; but in the end, the purity of Oregon’s crops, especially grass seeds, upon which the world depends, and organics is worth billions. Protecting these crops is vital. As we recently saw demonstrated, crops like wheat that our overseas customers demand be “GMO-free” have to be squeaky clean. And as American consumers demand “GMO-free” crops, or labeling laws push consumers to buying non-GMOs (as determined by various labeling laws), being able to isolate the various crops will be worth too much money for the Dept of Agriculture not to get right.

This will ensure exactly what proponents of local votes on GMOs are seeking: local control. But now, instead of worrying that County A’s local decision is overridden by the wind blowing in from County B, the Ag Dept is in a position to use science and good management to ensure this does not happen. As long as concerned legislators and citizens stay involved in this process, we can protect organic farmers and those who want to avoid GMO crops.

The real problem with SB 633 during the regular session was that it was forwarded in response to the movement in Jackson County to put the growing of GMOs to a popular vote. Whether or not that was the intention of the co-sponsors, including Democrat Sen Arne Roblan, that was how the bill came through: as a usurptation of local control. The bill in the special session had the same stench, and, to make matters worse, as noted above, seemed to be on the docket almost as if to mock the Democrats who opposed it.

But viewed in the light of setting responsible state-wide policy that will enable Oregon farmers to plant the crops they believe are their best choices — that is, local control of agricultural policy — this legislation has the potential to let Oregon get it right on GMOs, organics, and maintaining the value of our agricultural products that are among the finest in the world.

Diligence from citizens is critical; as Brad Witt said, “Hold us responsible”. Education about what GMOs are and where they’re grown is essential, and, I think, lacking. Opposition to GMOs must be based on science and economics; for example, when it can be shown that a new strain of crop actually produces poorer quality even if it might produce more or be resistant to bugs and disease — for now. And a final item to note from Witt:

Oregon can produce food that a hungry world needs. What if it’s a genetically modified crop that can produce that food in greater abudance than current strains? Would we not have the responsibility to do so? Yet Witt balances that argument with another: Genetic diversity is an equally compelling goal. He recognizes the need to ensure we protect heirloom crops and maintain “pure” seed strains. Feeding the world and maintaining genetic diversity are both goals that, he said, “are very sacred to me”.

[We also spoke at length about his understanding that protecting the enviroment, ensuring safety of humans and the natural world, is not only a critical goal on its own but fundamental to a thriving agricultural economy.]

So rather than simply oppose GMOs willy-nilly, our best course is to remain involved and informed. Like the fluoride debate earlier this year in Portland, I find reasons to both oppose and, well, not exactly support, but not freak-out over GMOs. I buy organic whenever possible, and I oppose agricultural policy that enriches corporations while producing crap food (tomatoes with no flavor or nutrients but, golly, you can store them suckers for months). Yet, as Witt said, if there are GMOs which Oregon can grow safely and produce to help feed the world — where’s the excuse to not do so?

I remain leery of where the Dept of Agriculture’s priorities lie, but not of Brad Witt’s, nor Jules Bailey or Jackie Dingfelder (Chairs of the House and Senate Environmental committees). I also trust that smart, compassionate, informed Oregonians won’t let the mapping and policy process disappear into a corner. We can balance maximizing agricultural output with ensuring that we do not harm either the environment or our non-GMO crops. And ironically, it’s this stupid GMO bill that now gives us that ability.