How sick is this? 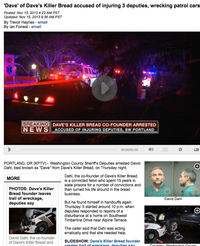 Suppose the news headline was this:

What would the response to this news be? We know quite well that answer: an outpouring of sympathy, well-wishes, prayers, and offers of support. The community would rally behind him, one way or another, wanting nothing more than a speedy and full recovery.

And if the headline was slightly different:

“…has a relapse of cancer”

Not just the same outpouring of good wishes, but a fervent hope that this time, the healing is full and complete. The flood of positive thoughts and words would, I expect, be over-whelming.

But that’s not the headline, and that’s not what the out-pouring is. Instead, we read of him being arrested, of a man who is out-of-control. The story on OregonLive, by Kimberly A.C. Wilson, who is apparently a journalist, makes no mention of the underlying cause of last night’s incident: Dave has an illness. It’s not cancer; it’s not the flu, nor pneumonia, nor beri-beri or typhoid fever or the raging chilliblaines.

Dave has a mental illness. How do I know? Sadly, because Facebook reported it: people familiar with Dave and his health history have made known to those who would pay attention that his mental health has suffered at times. Last night was the result of this. And here’s what’s so awful about the media’s reaction:

A mental health incident is no different than a physical health incident, but in American society and culture today, we refuse to acknowledge this basic fact. The jokes that will be made about Dave today will be plentiful, and each one will be an indictment of our collective ignorance and heartlessness.

Our laws, at least, have changed on this matter. The Oregon Legislature “normalized” mental health several years ago, requiring that insurance companies make no diffentiation between mental and physical health issues. The Obama Administration last week released new regulations that provide guidance on making the same true under federal law. Legally, those with mental health issues are to receive the same access to care as those who break their legs, get cancer, or develop type 2 diabetes.

Sadly, pathetically, too many of us still see the mentally ill as crazy, nuts, losers, cursed by God, and so on. Few of us would joke about the bald head of a woman fighting cancer, but that same woman, mentally ill, wandering the streets and talking to herself – left on her own as many of the mentally ill are – would be mocked and laughed at endlessly. The woman would be the same woman, just suffering from different health ailments. The difference would be us: our knowledge and our attitudes.

I have lived most of my life surrounded by people with mental health issues; I have lived most of my life with depression. This summer, I got to know a group of young people who have dedicated themselves to projects to “normalize” mental health. I was honored to assist in the making of a video they will be using to seek funding for their outside-the-box projects to reach their peers with the message that mental health is no different than physical health. They are truly on a mission from God, to quote the Blues Brothers.

Our society and our mentally ill need these young people to be successful. We need to stop being heartless bastards about the mentally ill.

I wish Dave Dahl well. He needs medical treatment, not incarceration, not news stories, and for damn sure not jokes and mockery. He needs to remain the face and identity of Dave’s Killer Bread. If he had cancer, hell, they’d use that for marketing in some way. But mental illness? You can bet part of the discussion at the company is “how will this affect sales?”. I’m sure they love and support Dave, but this is mental illness, and for too many ill-informed Americans, it’s not just another illness. It’s a badness.

I almost wish Dave had cancer. At least then he’d be receiving unconditional love and support. Instead, he’s just some nutjob who went crazy in his car. Ha ha, I wonder if it’s the bread!