We can honor Cindy Yuille by curbing gun violence in Oregon

On December 10th of last year, Jenna Passalacqua wasn't feeling the Christmas spirit. She wasn't going to get a tree and was planning to keep the whole holiday on the down low. But her mom, Cindy Yuille, had a different idea. She left a Christmas tree and a box of ornaments and lights at Jenna's doorstep to surprise her and lift her spirits.

That's just the kind of person Cindy was. "She was kind and generous and accepting of people", Jenna said when I sat down with her and Cindy's husband Robert Yuille earlier this week.

A day after leaving the Christmas surprise for her daughter, Cindy was shot and killed by a masked gunman, the first victim in the shooting at Clackamas Town Center. 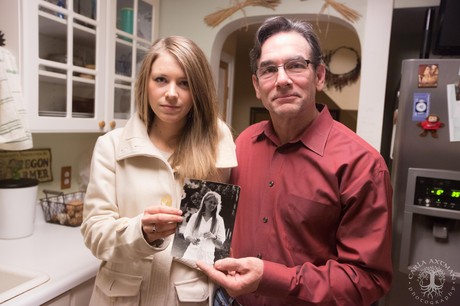 Jenna and Robert keep Cindy's spirit alive. A picture of Cindy with Robert and his son Hunter is displayed in their dining room. The kitchen that Cindy lovingly decorated remains intact, the bright and warm atmosphere evidence of her personal touch. When Jenna and Robert talk about Cindy and the kind of woman she was, they smile and sometimes look off into the distance, as if they can see her standing nearby in the room.

"We would have been married eight years in November," Robert said. "She was about as normal as it gets. She was a good cook, she sewed, she did all the painting in here, she was a gardener. She was a very intelligent woman." Their life together was very active. "We hiked, we skied, we camped, we boogie boarded and traveled." They traveled all over the world, in fact. And Cindy was the organizer, he said.

Jenna remembers her mom as a stay at home parent who was deeply involved with her school and activities. Cindy was well known because of her visibility in the community. But Cindy was also a woman who took initiative. When they lived in San Diego during the 90s, the city didn't have a recycling program. Cindy went around and collected all the neighbor's cans and got them recycled herself. When they moved to Oregon, she petitioned Fred Meyer to carry organic milk before having an organic section was the thing to do.

"She was absolutely incredible," Jenna said. "She just did it all. She was a very strong woman who stood up for what she believed in."

Cindy's family lost her to a terrible act of gun violence. An act that may very well have been prevented. It's loss that's felt very, very deeply.

Jenna's op-ed in yesterday's Oregonian says much about the loss they feel:

In the United States we are free and proud to speak our minds, go where we please and own guns if we want. Until my mom was murdered, I didn’t think twice about feeling safe in a mall, school or movie theater.

But in 365 days, I’ve become a different person. I’m driven to take action. Gun violence left a gaping hole in my family, tore apart our community and showed us we aren’t immune.

But even this horrific, high profile act of gun violence hasn't moved the Oregon Legislature to action. Last session, four gun safety bills were scuttled during the session. Even a bill to close a background check loophole went by the wayside, leaving the door wide open for those with a history of violence or with a serious mental illness to have access to guns.

With 75% of Oregon GUN OWNERS in favor of background checks, this lack of action is ludicrous in the extreme. Not to mention shameful.

I’m working with Oregon Alliance to Prevent Gun Violence and Mayors Against Illegal Guns to combat gun violence because while no single solution will prevent all massacres, we can still prevent more families from experiencing this grief.

While Oregon already requires background checks on guns bought from dealers or at gun shows, private gun sales create a dangerous loophole that caters to criminals, the seriously mentally ill, and other dangerous individuals. Background checks help prevent those people from getting guns — and they’re supported by 81 percent of Oregonians.

A wonderfully smart, gifted woman was ripped from her family. An obviously troubled young man was able to gain access to weapons that weren't locked away out of his reach. And even if you believe that an off-duty security guard stopped the shooter because he was carrying a gun, an open question for many, that wouldn't have saved Cindy Yuille.

"My mom was killed with the first bullet that was shot. So even if there was some 'good guy with a gun', that wouldn't have stopped my mom from being killed.", Jenna said. "She would still be dead."

"We need to stop the first shot from being fired, " said Robert.

While the Oregon Legislature hasn't managed to take action, the community-at-large has. Jenna and Robert say they are incredibly grateful for all the support they've received following Cindy's murder. "All the people that have donated things to us, those things have actually got to us", Robert said. "It's really helped our family and our home, and it's very much appreciated."

A candlelight vigil will be held this evening at dusk in the open area near the Clackamas Town Center Cinemas, in remembrance of those who were murdered on December 11, 2012.