I should have expected the recently announced retirement of my pal, U.S. Rep. George Miller, the liberal lion from the Bay Area and powerful ally of Democratic Leader Nancy Pelosi. Forty years is enough of a lifetime to give to one’s country. Yet the news yanked at my moorings. It said that, inexplicably, George and I had become 70-some-year-old men. On the scoreboard, we were in the Fourth Quarter.

The two of us arrived in the U.S. House in 1975, a couple of Young Turks. He was 29, and I, 32. We bonded immediately. After all, an arms race had to be checked that promised nuclear Armageddon. Off-shore oil drilling was poised to wage war against the environment. Fascists were slaughtering their people in Central America. And doing it with U.S. support because they had the wit to say they were “anti-Communists.” This was good enough for Reagan and Weinberger.

I remember telling the House that Hitler was “anti-Communist,” too, but America hadn’t supported him–and we shouldn’t support his tin can imitators in Central America.

George and I made several trips to El Salvador, Guatemala, Nicaragua, and the state of Chiapas, in southern Mexico, to document U.S-financed rape, castration, and mutilation–atrocities that were turning people away from the United States. 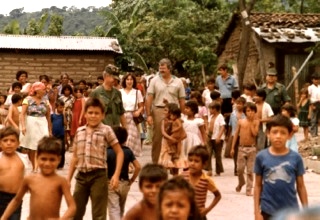 George Miller (center), a giant of a man, was swarmed by children in a village south of San Salvador (Circa early 80s). The kids loved him, and he loved them back. To Reagan, this was “insurgent country.”

In Nicaragua, we spoke with villagers for whom Portland’s Benjamin Linder worked to build a small dam for electricity, a miracle for them. Ben didn’t finish his work because the Contras shot him dead. Villagers told George and me of an execution. The Reagan State Department said, no, Ben died from a stray bullet in a battle. The villagers gave me grisly photos of the corpse.

Back in DC, I used my seat on the District of Columbia Appropriations Subcommittee to have the city’s chief of detectives give his analysis of the photographed wounds. He showed George and me gunpowder burns on the temple and other incontrovertible evidence of a shot fired inches from Linder’s temple.

George Miller had a giant’s capacity for rage against injustice that rivaled his capacity to love (especially children). When we took testimony from relatives of the brutally slain, George’s jaw set so tightly, you’d think it was made of of stone. Once, a couple of neocon Republicans joined us on a mission to Chiapas, Mexico. Pictured below is Rep. James Sensenbrenner (R-WI), “dressed” for work in a village in the remote mountains of that region. 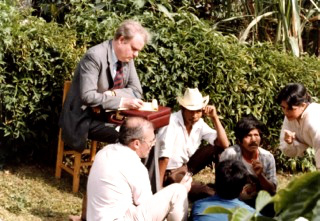 Rep. James Sensenbrenner (R-WI), a leading House conservative, accompanied George and me to Chiapas, Mexico, where human slaughter was part of daily life. (I don’t know where he got the chair.)

Later, in Managua, Nicaragua’s capital, George and I demonstrated more than a stylistic difference from Sensenbrenner as we gathered with colleagues in the city’s central plaza in front of a Sandinista poster of Augusto Nicolás Calderón Sandino, their revolutionary hero. 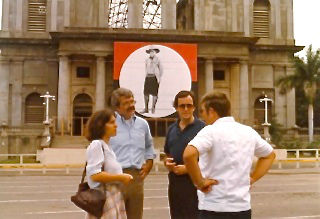 In our travels to the region, the right wing Arena Party of El Salvador threatened our lives if we came into the country. We did a corkscrew helicopter ascent from the supposedly “insurgent free” San Salvador to keep from being shot out of the air. I still shiver to think about the single strap across an open door that held us aboard as the craft twisted at a 45 degree cant with the capital straight below at our feet. The GI standing beside us with the .50 caliber machine gun offered little comfort.

George, my bro, I love you. We had a time. We did some good. And we still believe.