A snow plow #fail is not an indictment against all government, of course, but this particular futz-up illustrates why the margin for error for government is so slim. And rightfully so. 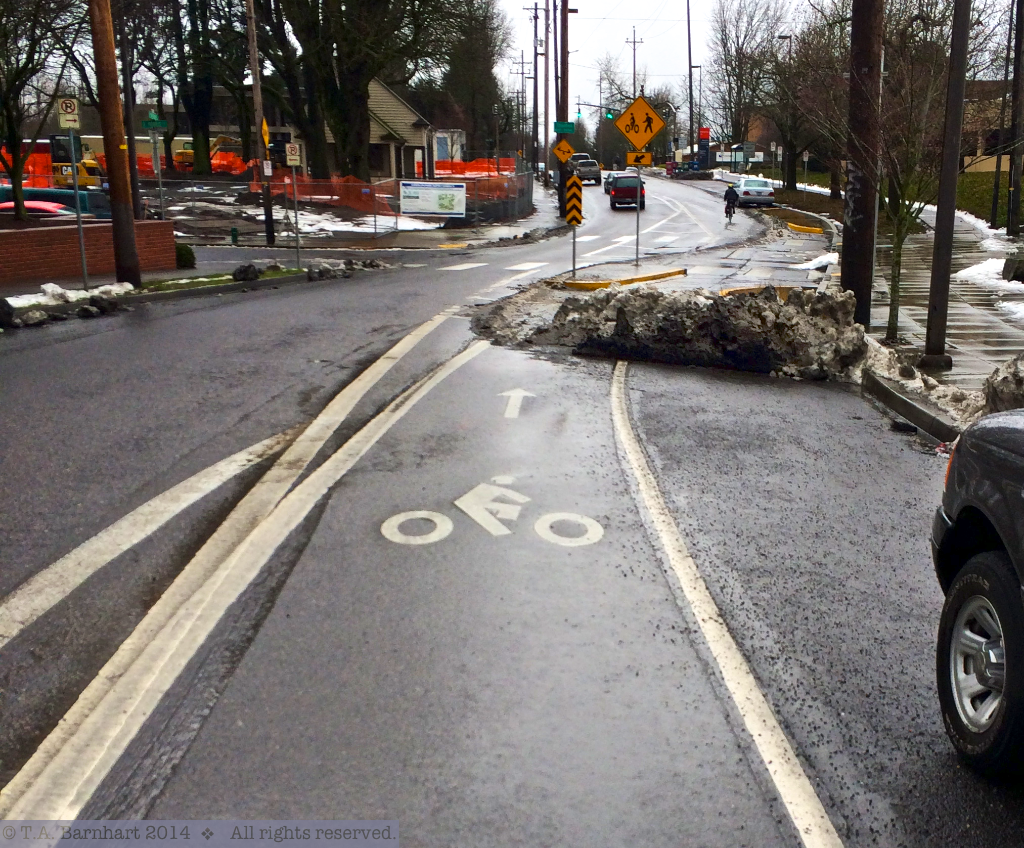 This is N Vancouver as you approach Legacy Emmanuel Hospital, a few blocks south of N Fremont. There is a parking area on the right, a motorized vehicle lane on the left, and a bike lane in between. This is one of the busiest bike routes in the city and one I use almost every day.

The bioswale and pedestrian island were built in 2013 to upgrade safety at the intersection, which is in the middle of a long S-curve, with an entrance to a parking garage on the right and a stop-lighted intersection just beyond. Cars, trucks and buses are funneled to the left; bikes to the right; pedestrians have a safer, more visible crossing and bicycles entering N Vancouver have lane guidance just beyond the island. Despite the lack of lights, the improvements work well. 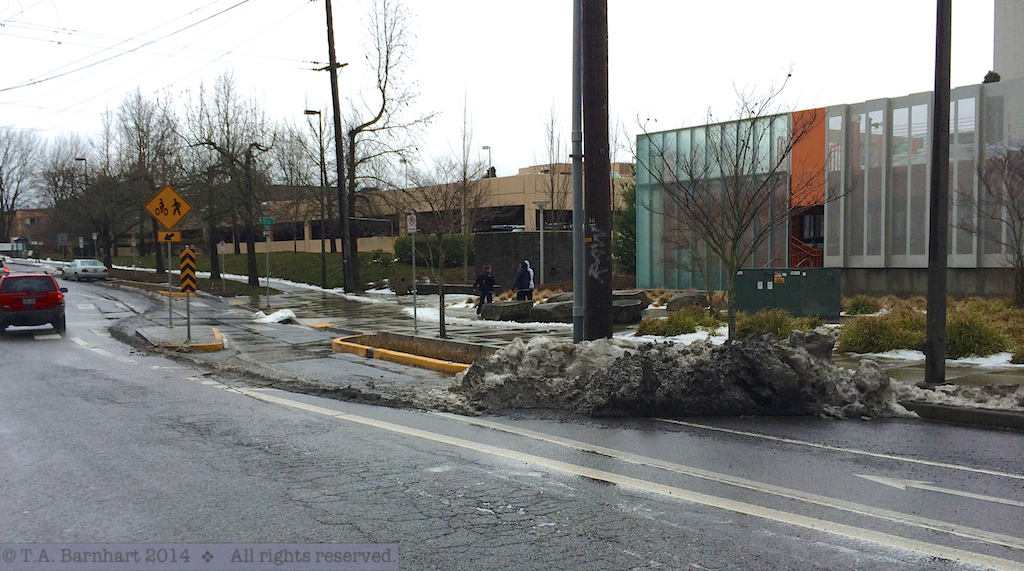 Until this happens. The snow plow that cleared off N Vancouver, including the bike lane, simply piled the snow at the end of the parking area, up against the bioswale. As a result, the bike lane was walled off. Not exactly The Wall from the Game of Thrones, but not safely passable, either. Here’s a better view from a bicyclist’s perspective: 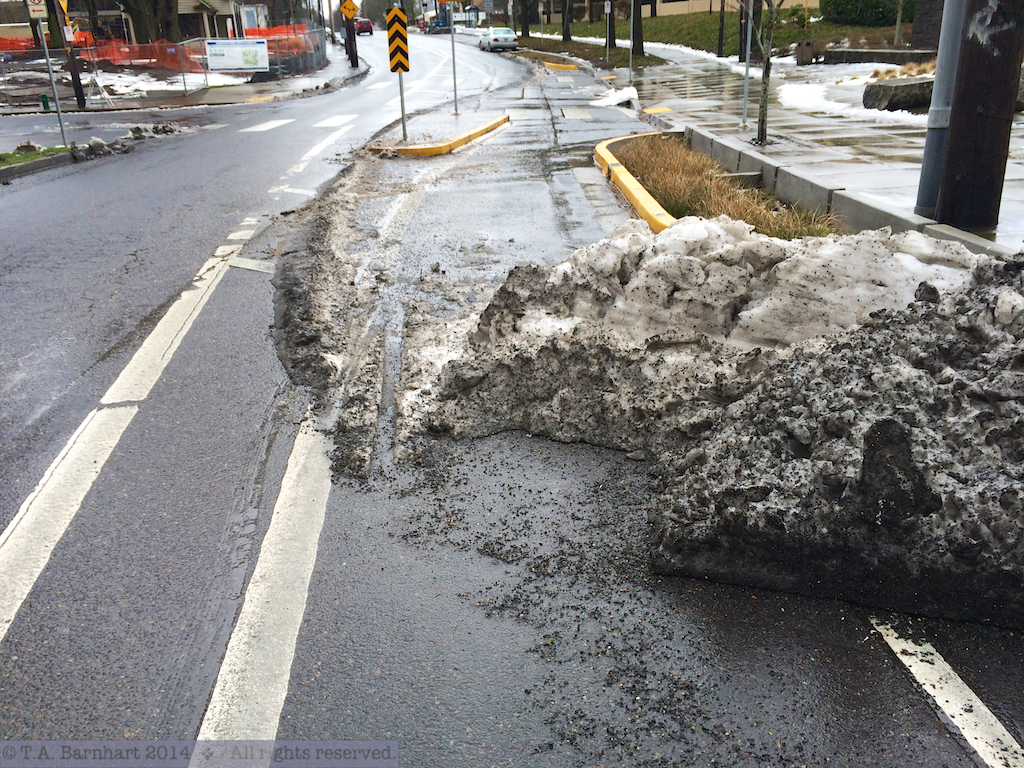 As the snow got softer and slushier, plowing through that tiny gap became a bit easier, but still very dangerous. For many, the safer alternative was to swing left into traffic with the cars and other mechanized death machines. When “safer” becomes a choice between jumping into the motorized vehicle lane or risking a crash on a hazardous surface, then what we have is a Portland Bureau of Transporation fail.

Portland bike riders are used to this: construction and maintenance workers of all kinds with no understanding of what bicycle road safety requires. The dumbest, of course, is “Bikes on Roadway” signs plonked right into the bike path – with plenty of space to the side – forcing bikes onto the roadway. There are so many different ways crews can increase the hazards for bicyclists, and those of us who ride daily discover them on a regular basis.

In all cases, the failure to maintain safety for Portland’s bicycling citizens is, at root, a failure of good government. Whether it’s training, management, or give-a-damn concern, every time the safety of riders is put at risk in this way, we discover another government has failed to fulfill its basic mission to protect the welfare of citizens.

Obviously this is not on the same level as the lack of regulatory oversight that led to the fertilizer plant explosion in West, Texas, or the current poisoning of West Virginia’s drinking water. Local bike riders are used to this treatment and these conditions; we’re prepared to deal with these hazards and most of us have the skills to cope. That doesn’t make this acceptable, however. The potential for tragedy is too great:

Five years ago, following the last “snowpocalypse”, I was riding my bike to work; the bike path from the Ross Island Bridge to SW Kelly (a horrible ride, but that was my only route) took me on the sidewalk along SW Hood. And on a Friday morning, after three months of post-snow gravel being tossed on the sidewalk, my tires slid out from under me as I made the right turn onto Kelly. I slammed to the ground, breaking my shoulder.

That gravel should have been swept off SW Hood after the snow had melted. The sidewalk should have been cleaned off. Neither occured until the following week — when I called PBOT and notified them of my injury and how it occured.

I probably should have sued the City. I didn’t.

Government has a primary responsibility: protect the safety and welfare of its citizens. As progressives, we believe this is a fundamental requirement, and that’s why we support programs like WIC, food stamps, the EPA, food safety inspections and so on. Government fails on this basic duty in two ways: failure to act and acting improperly. In 2009, I was injured by government failing to act; this past week, thousands of us were put at risk by government doing its job badly.

This is not about me and what I’ve had to put up with; it’s meant to be illustrative of why government matters, and why competent government is critical. The Tea Party has its roots in racist anger, but it connects with many citizens who are just pissed off with government. When government gives these angry people a good reason for their anger, it also strengthens their illegimate reasons (“Look how bad the Obamacare website is — and those regulations are killing jobs!”). Government #fail is a body blow to democracy.

Portland city government doesn’t have the resources it requires to get done everything it needs to; Oregonians, like most Americans, have been willfully strangling their governments for decades. The lack of sidewalks in easty county, the state of our schools, the inability to feed all our children are all failures of Oregon’s citizens to support and fund an equitable tax structure.

But not blocking bike lanes isn’t about taxes. It’s about simple competence. PBOT employees have to do better. Private construction crews have to be instructed not to endanger bicyclists and pedetrians. These are objectives that can be fulfilled by the simple step of giving a damn. When a worker endangers the public and his superiors are clueless about it, then we see government not caring about the people it’s there to serve.

That is a brutal fail that has to end. Otherwise government itself, democratic government, is the one under threat.