You could call this the reverse WalMart policy. Instead of big corporations paying employees so little that they have to rely on government services, you tax large corporate employers who won't pay $15/hr to subsidize our city's small businesses who would love to see their employees' quality of life improve. 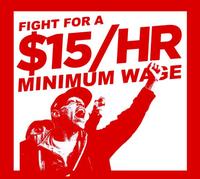 By Nicholas Caleb of Portland, Oregon. Caleb is a professor, an activist, and a candidate for Portland City Council.

As the Portland Mercury first reported, despite taking the nation by storm and dominating Seattle's psycho-sphere, the discussion of raising the minimum wage was completely absent in Portland politics until I entered the City Council race advocating for a $15/hr minimum wage. Since then, both Dan Saltzman and Nick Fish have issued vague statements in support of raising the minimum wage (Saltzman says somewhere between $10 and $15). Other local candidates have also started to express interest in raising the minimum wage, which is not surprising considering its rapidly growing popularity in more and more cities. Not to mention the fact that $15 Now makes good economic sense and is fair(er) to employees whose productivity has steadily increased for 40 years while wages have stayed stagnant. In Portland, there doesn't seem to be much dispute about these facts.

So why not just pass a minimum wage increase? Well, in 2001, the Oregon State Legislature, at the behest of the restaurant lobby, passed Oregon Revised Statutes § 653.017 which preempted cities from raising the minimum wage because of, as Dirk VanderHart put it, "the fear of a patchwork nightmare of local wage laws." In other words, the restaurant lobby sees local democracy as bad for business. This is particularly annoying in Oregon, which was the first state to enshrine home-rule authority into the state constitution and trust cities and counties to make the right call on issues of local importance.

Ending the minimum wage preemption is right and important because ORS § 653.017 is anti-Democratic, against the spirit of our home-rule state constitution, and the restaurant lobby's rationale is pathetically weak. Cities must have the tools to maintain wage equity. Lobbying the Oregon State Legislature to remove the preemption is one way to pursue a change in policy. But, the preemption is not nearly the obstacle that it is has been made out to be. Those insisting that nothing can be done to raise the minimum wage right now in Portland are overlooking a host of available strategies for achieving the goal of giving workers fair(er) wages. The city has the power, preemption or not, to act right now to create a new livable wage standard in Portland. And they should start with $15/hr.

Here are three ways get it done:

(1) Pay all city workers at least $15/hr. The first exception to the minimum wage preemption in Oregon Revised Statutes § 653.017 is that "[a] local government may set minimum wage requirements [...] for public employers." This is truly straightforward and doesn't require a change in state law. The City of Portland is a public employer, so council can pass a law to raise the minimum wage for those employees that aren't currently earning $15/hr. This is what Seattle Mayor Ed Murray proposed immediately after Kshama Sawant was elected on the $15/hr platform.

(2) Ensure that at least $15/hr pay is a condition of any contract that the city enters into with a business or contractor. ORS § 653.017 also contains an exception where "[a] local government may set minimum wage requirements [...] [i]n specifications for public contracts entered into by the local government[.]" This means council can and should make a policy that any contracts entered into with any businesses or contractors contain provisions that employees, including those categorized as subcontractors (a common way for contractors to evade primary contracting responsibilities), be paid a $15/hr minimum wage.

(3) Use city taxing authority to create a fund to subsidize workers earning less than $15/hr. This option is not as straightforward as simply utilizing an exception to the minimum wage preemption, but it is just as viable. Instead of setting a minimum wage, city council should enact a living wage tax on employers who aren't paying $15/hr and create a fund for employees that don't earn $15/hr to collect from. Ideally, this would be a progressive tax with top earning employers paying a higher tax rate to subsidize lower earning small businesses that might otherwise struggle to adapt. You could call this the reverse WalMart policy. Instead of big corporations paying employees so little that they have to rely on government services, you tax large corporate employers who won't pay $15/hr to subsidize our city's small businesses who would love to see their employees' quality of life improve. Currently, the City of Portland applies a tax of 2.2% to any business that has more than $50,000 in revenues per year. You could pair the living wage tax with an adjustment in the city tax so it kicks in at a higher revenue threshold which could ease the burden of a living wage tax on small business. And legally, there is precedent that a tax like this is distinguishable from a penalty system like traditional minimum wage enforcement. One has to look no further than the Supreme Court's recent decision that Obamacare's healthcare mandate should be categorized as a tax rather than a penalty. Similarly, a living wage tax is qualitatively different than a minimum wage and would evade preemption under ORS § 653.017. In fact, a progressive living wage tax might actually be more attractive than a simple minimum wage adjustment because of its potential redistributive qualities and the protections for small businesses that could be built in.

There's absolutely no reason why Portland's elected leaders can't begin implementing these solutions. Everyone has a right to the city, and increasing the minimum/livable wage to a $15/hr is not only necessary, but feasible, fair, and makes sound economic sense.

You can sign the petition demanding that city council take immediate action on raising the minimum wage to $15/hr. For more information about my campaign, please visit CalebforCouncil.org and contact me at [email protected]