Deborah Kafoury for Chair: She Gets It

"No one else does what Multnomah County does — to be the safety net for the community. If we don’t do our job, no one else will." — Deborah Kafoury 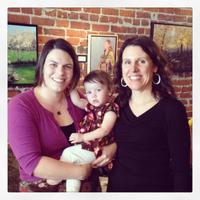 My daughter and I with Deborah at an event in St Johns.

It’s 3:00 pm a little over a week ago, I am rushing to my son’s school to pick him up after a communication snafu at home. School gets out at 2:45. It’s not the worst thing in the world, of course, that he is sitting in the library wondering where I am, but I remember what it felt like to not be picked up and all of the many reasons why my mom wasn’t there, so it’s a sensitive spot for me. I get my son from the library. He said he was a bit worried, but it seems fixable with a hug and a heartfelt apology.

Now to figure out how I am going to coordinate getting downtown for my meeting with Deborah Kafoury to interview her about her race for Multnomah County Chair. I am running late and now will have a kid in tow. I text her campaign manager sheepishly, "I am going to be about 10 minutes behind and I have my son with me.” Her reply, “Why don’t I just have Deborah call you?” is a relief. She gets it. She understands.

When Deborah calls me, she says apologetically, “I’m sorry, but toward the end of this call, I am going to need to walk to my car so I can make it to a school event.” “Of course, no problem,” I reply. I get it. I understand.

And the good ones do. Public servants that is. And Deborah Kafoury is the kind of public servant that we all deserve. Deborah is smart, compassionate, and effective, with an extra emphasis on effective because it shatters the all too pervasive notion that compassionate public policy can’t also be effective. Deborah shows up where it matters and where it’s not always popular. Like last year, in the wake of the Clackamas Town Center shooting and Sandy Hook, she participated in a community panel at a middle school in East Portland to talk with community members about solutions to reduce gun violence. There were many notable faces not in that room that evening, but she was there. She gets it.

These elections are never just about competence, which Deborah has in spades through her experience in the Legislature and as a Multnomah County Commissioner. They are also about style and approach. I don’t know about you, but I want a Multnomah County Chair who knows how to prioritize. One who knows when to show up for the community on an issue of great controversy and one who will balance her leadership responsibilities by also making sure to take time to attend one of her children’s school activities.

Deborah Kafoury has the experience and the compassion to ensure that County residents receive the services they deserve to secure their social end economic future. Deborah says, “It’s what you do.” Again, she gets it.

Below is the Q&A I did with Deborah on the phone in my living room while my son built up his inventory on Minecraft.

Why are you running for Multnomah County Chair?

I care about children and families. I have served on the commission for the past 5 years and during that time, I have been primarily focused on helping families get out of poverty and into housing. I really believe that it is in the Chair’s position that I can make the biggest difference in the lives of families in our community.

First of all, I can’t wait to get back. I had to quit my position and left some of my projects on the table and am excited to get back.

One of those projects is to consolidate and coordinate housing and homelessness services between the City of Portland, Multnomah County, Home Forward and the city of Gresham.

Another project that needs my gentle guidance is the rebuilding of the downtown courthouse. First and foremost, it’s a public safety issue. The downtown courthouse is 100 years old and it’s structurally and functionally obsolete. When the big one comes, it’s going down. Over the past 40 years, there have been 26 studies on what to do. Until I came to the county there was no movement.

I’m also working on a project with domestic violence prevention providers to coordinate services so they can better identify the victims who are facing the greatest threats and make sure they are prioritized for services including housing and shelter.

You have put an emphasis on Multnomah County staying focused on its core services — how does that focus help the region fulfill its economic development goals?

No one else does what Multnomah County does — to be the safety net for the community. If we don’t do our job, no one else will. The way we can make the best impact is doing our job and doing it well. I obviously understand the importance of jobs. People can’t get out of poverty unless they have jobs that provide a living wage. We partner with organizations that offer job training (Work Systems Inc.) and business recruitment (Greater Portland Inc.). We don’t need to recreate the wheel.

Many families rely on SUN school for supporting their families’ childcare needs, which in turn supports their ability to work — funding for this program has become more sustainable due to recent efforts, but there is still more to do — what is ahead for this program?

We want to both grow the number of schools that have SUN School and we also need to be cognizant that some schools need greater depth than they are getting now. It’s a delicate balance. We need to go broader and deeper. I also think that one area that has a huge potential is in sending out the RFP for SUN school providers — that will give us a chance to get more culturally specific providers engaged.

In terms of people’s involvement in County government, I would encourage people to attend one of the County budget hearings. The County is going to have $469 million in its general fund budget. It’s a chance for the public to weigh in about their priorities. Also send letters, emails, call the commissioners. They need to hear from you.

You have been a vocal and visible supporter of efforts to reduce gun violence, an issue of great controversy. How do you approach your public stance on controversial issues?

I have never shied away from taking on controversial issues. It’s our responsibility as elected officials. I speak from my heart and I never want to be a politician who only tackles the safe issues. If there’s an issue that’s important and it’s affecting families in our community whether it’s the lack of affordable childcare or abundance of gun violence in our community, I will be talking about it.

What’s one issue you would have liked to see have more priority in this campaign?

Issues that affect working moms — be it lack of affordable childcare, the number of school days that kids don’t go to school, reliable transportation, or the dearth of jobs with flexible schedules. There are a whole lot of issues that women and mothers face if they want to return to the workplace that aren’t being talked about.

One thing I am very happy about that has been talked about is the issue that has been my primary focus during my time on the County commission...helping homeless families get into stable housing.

You are a mother of three — does that matter in this race?

I think that being a mother and balancing family life and professional life really gives you insight into the lives of real people in our community. It makes me appreciate and understand how single moms and single dads do it and people who don’t have reliable childcare. There’s a reason why MotherPAC endorsed me and the Working Families Party endorsed me.

You come across as a disciplined person, besides dancing for charity, what is one thing you do to splash out?

I run and I go to Boot Camp for exercise twice a week — it keeps me sane.

Lightning Round — because our elected officials are people too!

(After much deliberation) Mountain

(We agreed to disagree about this.) Try to avoid donuts.

What local sporting event would we be most likely to find you at?

What’s the impression you want people to come away with?

I hope people know that I am honest, that I am real and I will get things done.

Anything that we didn’t get to talk about?

I am really excited about being Multnomah County Chair. I think the County government does really great things for people in our community and I am hopeful about the — I think we can do good things together.