How one voter got two candidates to personally compete for her vote.

By Brittany Powell Parich of Portland, Oregon. Brittany is an artist and the co-creator of LowCommitmentProjects.com, a project where she and a friend create and share "concepts and schemes without a huge outlay of time, energy, or money." Editor's note: This post was originally posted at LowCommitmentProjects.com on May 26 under the headline, "All Politics is Local" and is republished by permission (because it's awesome.) 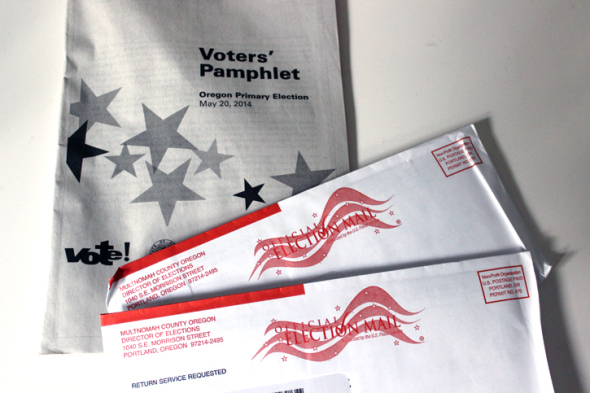 In Oregon, we vote by mail. A few weeks before election day, which is just a due date for ballots, we receive a Voters’ Pamphlet and thick envelopes containing our ballots.

For our primary election this spring, we faced one particularly contested race about which I knew next-to-nothing: Oregon House District 42. We were voting on the Democratic candidate with six people were running, though the real contest seemed to be between just two. Both Teddy Keizer’s and Rob Nosse’s campaigns sent recycle-bin-fuls of mailers, called us on the phone, and interrupted our dinners, plus both candidates stopped by our house in person briefly (neither at a time when we were available). 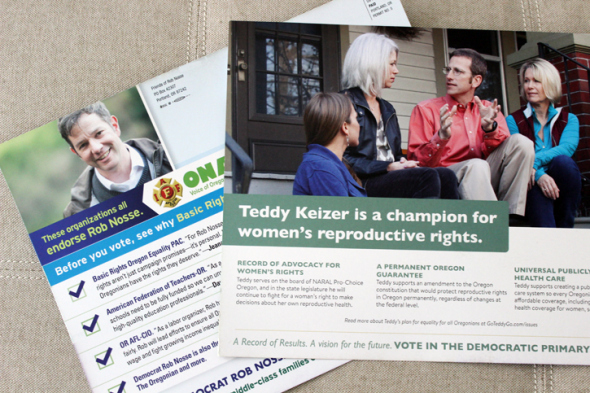 These two candidates sounded fairly comparable: very liberal (we apparently live in “Oregon’s Bluest Spot,” so that isn’t a surprise) with similar goals. After reading about them in the voters’ pamphlet and in local media, I still wasn’t clear on their differences.

So, I emailed Teddy and Rob on the off chance they might be able to help us decide: 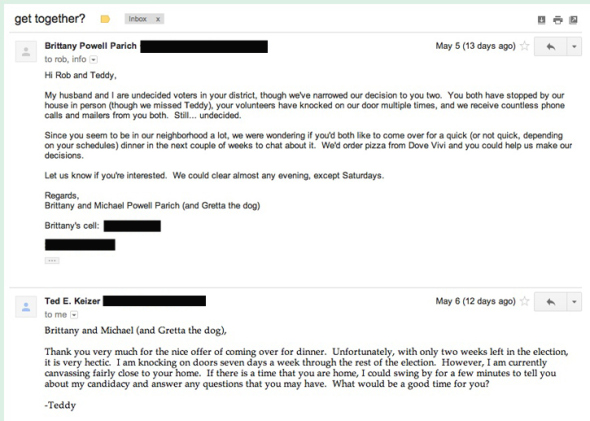 You can read Teddy’s reply above. We arranged for him to come to our house on a Sunday afternoon. Teddy’s views closely aligned with our own. His three areas of focus are the environment, education, and health care (with a bonus issue being the disparity in wealth between rich and poor). Environmental groups support his candidacy. 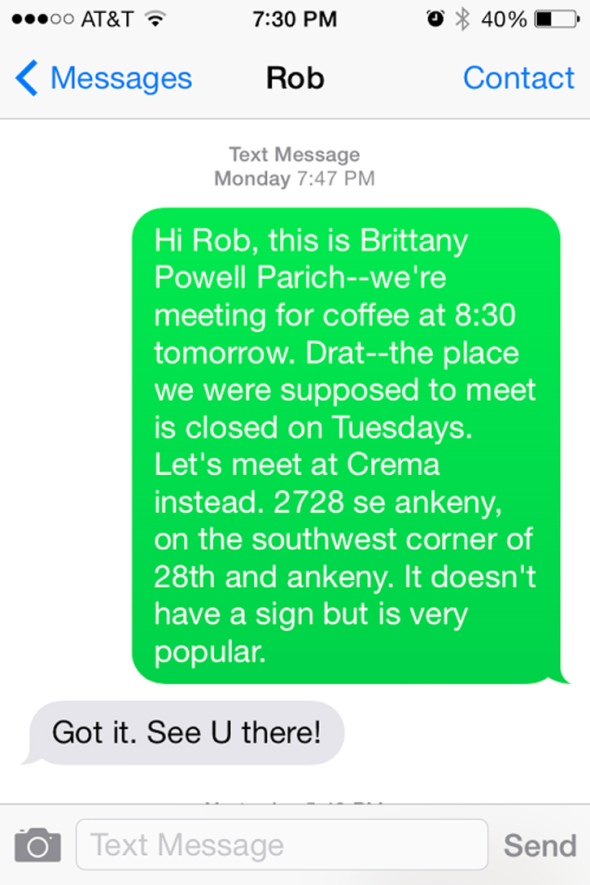 Rob left me a voicemail, then we arranged a coffee meeting (amended by my text, above). My husband couldn’t come, so I did all of the talking. Rob’s three main goals are tax reform (money for schools and the growing income gap), single-payer health benefits, and climate change (…sound familiar?), with mini-goals of raising the minimum wage, sick leave pay for the whole state, and gay rights. Unions, NARAL, Basic Rights Oregon, and many other local groups and media support Rob.

You can see why our choice was tough. Our situation was lucky–we had to pick the best of the best, knowing full well that either person would do us proud.

We did discuss local-centric issues with both candidates, and found out more about each one’s background and experience. In the end, that’s what helped us make our decision. 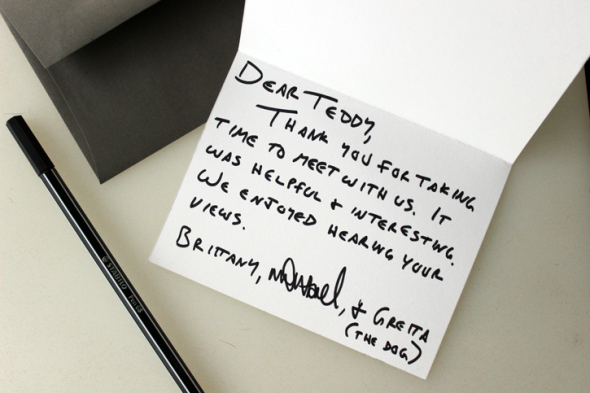 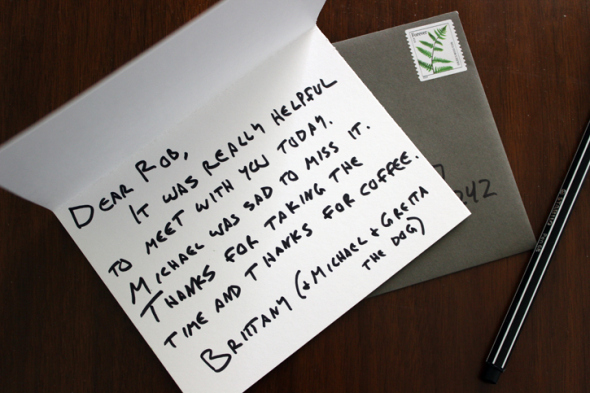 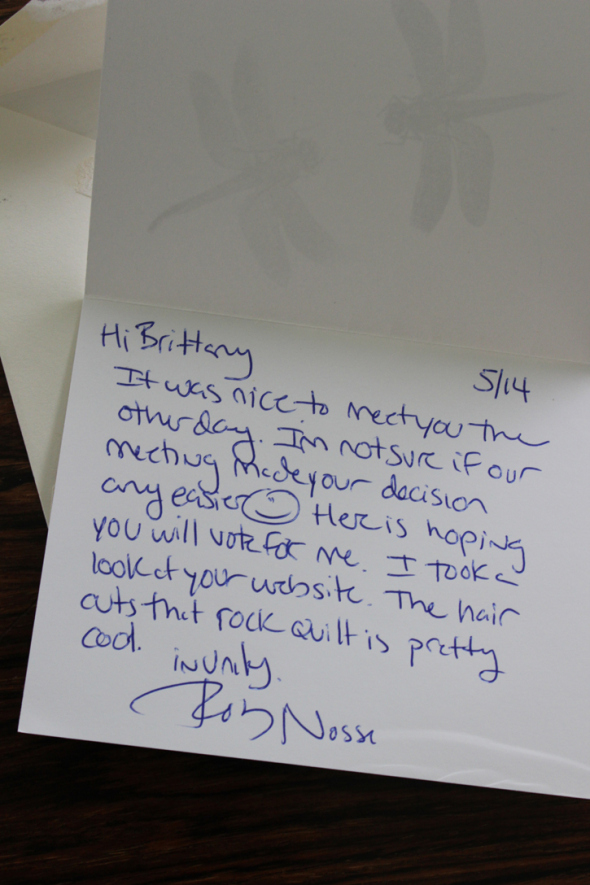 I sent thank you notes to both Teddy and Rob, and was surprised to receive one from Rob on a homemade card. Note: there’s a shout-out to Low-Commitment Projects. 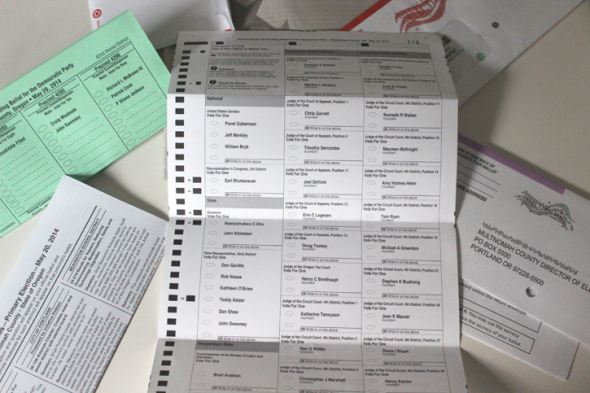 This is all of the stuff in those ballot envelopes. We fill out the white ballot sheet, fill out the green one, stuff them in a privacy envelope, then put that in the outer envelope, stamp it, and mail it. 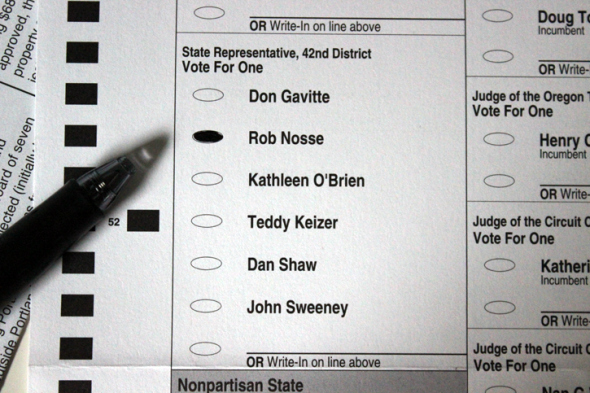 I sent this to Rob the next day: 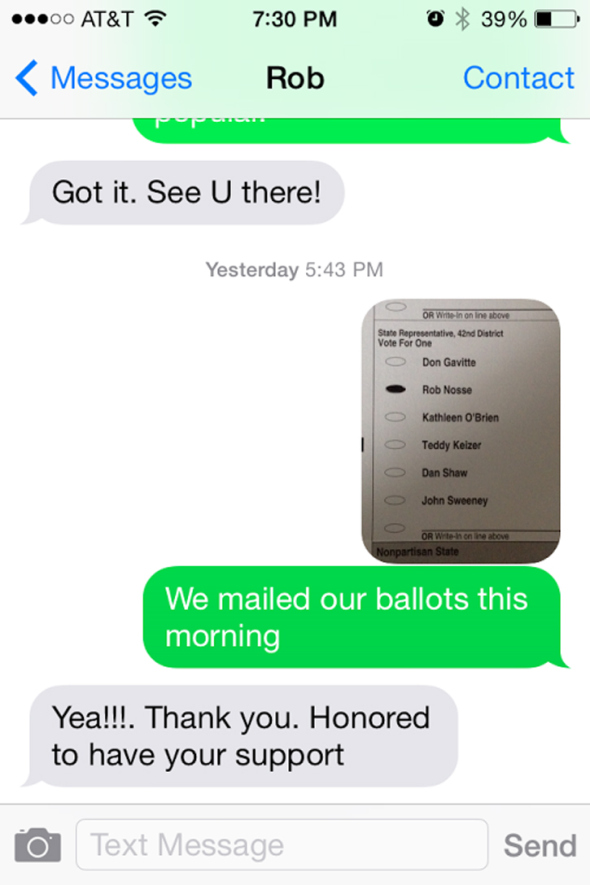 A note about this project: I debated whether to post this here as an art project, then I realized our website is called “Low-Commitment Projects” and doesn’t contain the word “art.” Since I don’t have to address that word, and because I feel confident this does qualify as a “project,” here you go.

A second note about this project: Voting and politics can be personal, so I was a bit apprehensive about making this public. But, I share artwork that I make with my own hands and brain, about which I’m sometimes overly fragile, so surely I can share this.

If your views differ from mine, let’s be ok with that. Think of this as proof that someone who doesn’t know much about politics can proactively educate herself in a very direct, personal way.