The Oregon Airspace Initiative & Visiting F-18s - Are We Overarmed?

Do we need more F-18s flying over Portland, Vancouver and the Willamette Valley? 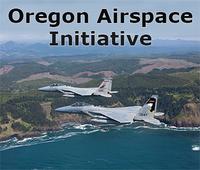 Is it Necessary to Have Fighter Jets Flying over Portland in August, or Ever?

In the discussions that we're having about whether or not the police are overarmed it seems prudent to question the necessity of the Oregon Space Initiative of our local Air National Guard. The other day this came in the mail from the Cully Neighborhood Association:

Portland/Vancouver metro area residents may notice a temporary change in aircraft operations due to additional military jet operations in and out of PDX from August 3-23, 2014. Visiting military jets (F18/Hornet) will be included in the daily training exercises routinely performed by the 142nd Fighter Wing of the Oregon Air National Guard. The addition of this aircraft type may influence the typical noise exposure in the communities surrounding PDX.

Thank you for your understanding during these temporary conditions.
Related Link: Noise Management at PDX

Here are a couple problems with having jets visit the Portland area during August - or, really, anytime.

Note: you can reach the public affairs office of the 142nd Fighter Wing, here: 503-335-4104 and via email, here usaf.or.142-fw.list.pa@mail.mil - and they, and the PDX Noise Hotline pdxnoise@portofportland.com do take note of our communications and take them into account.

I would like to hear what you think about this situation and whether it falls into the category of having more arms around than are needed. And, if this issue concerns you, please let the Air National Guard and PDX Noise Hotline know your concerns.

A friend wrote me and asked me to mention that he was hiking in the Mt. Hood wilderness areas today and heard jets flying overhead twice. The impact is harsh. Three things - 1. What's the impact this has on tourism? 2. What's the point of having a wilderness area if we're going to have low-flying fighter jets screaming overhead? 3. How does this impact other species?