By Jim Kelly of Kimberly, Oregon. Jim is the founder of Rejuvention, Inc. and chief petitioner of Measure 90.

Kari Chisholm recently presented a mailer targeted to urban Republicans by the Yes on 90 campaign as “proof” that Measure 90 is aimed at helping Republicans. With this submission, I am providing the mirror image ad that was mailed out to rural Democrats, like myself, to make the same point - that with the current system their vote does not really effectively count in the primary. So let’s get real. Check it out (click to zoom): 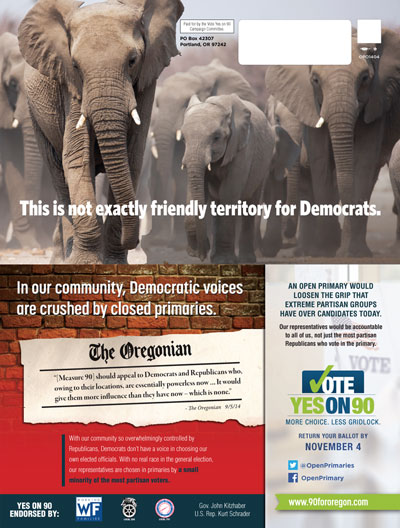 Both the Democratic Party and the Republican Party hate Measure 90. It might be interesting for BlueOregon readers to note what I hear most commonly from those on the right when I am talking about Measure 90. Over and over Republican partisans tell me that they believe Measure 90 is a plot by the Democrats to wrest all power away from them, and to insure Democratic domination into the future. For that reason Oregon Right to Life opposes Measure 90 (something the Yes campaign coalition does not like to admit!).

Given their progressive values, I am proud that many Democrats, despite their party’s opposition, do truly care and believe in inclusion, and are more open to hearing about the merits of Measure 90, and supporting its passage.

The opposition is now sending mailers attacking the proponents and funders of Measure 90, portraying people like me as greedy, and only supporting Measure 90 for some sort of mysterious personal gain. Unbelievably, these fliers never mention what the Measure is even about – not a word about primaries or voting. Again, let’s get real.

The number of Oregon voters who cannot legally vote in partisan primaries just exceeded 700,000, up from 650,000 when we started our campaign. And just last month the percentage of voters not registered as a Democrat or Republican grew to 32% - and that number will continue to grow (compare to 2% in 1960). 49% of Oregon voters under 40 have rejected the major parties. And of newly registered voters, May through September, nearly 75%, (mostly these are young voters), have rejected both the Democratic and Republican parties. Democrats and Progressives would be foolish to ignore theses stunning numbers and trends.

I recognize and respect that reasonable people will often come to different conclusions, even while looking at the same information. I am frustrated, however, by the “perfect gets in the way of the good” kind of logic that condemns Measure 90 because it does not fix all that is wrong with Oregon politics. I strongly agree that we must do something about finance reform. But I would remind BlueOregon readers that recent efforts in Oregon to enact campaign reform have been defeated by Republicans, Democrats, and Our Oregon. If Measure 90 passes, it will create an opportunity for those groups to get serious about campaign finance reform. All of us should push them hard to make sure that happens. I know I will.

Measure 90 is not a panacea, and we have never made it out as such. But it is a solid step towards making our system more equal, fair, and functional. First and foremost all voters will be able to meaningfully participate, and it will help elect candidates who are the most representative of all the voters in their district, whether that district is left or right leaning. That’s called Democracy.