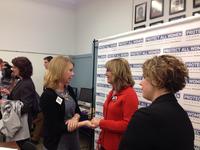 Giffords speaks with the Oregon President of Moms Demand Action

Over 60% of intimate partner related homicide is committed with firearms, as compared to approximately 50% for all Oregon homicides. Of the intimate partner related homicides in Oregon between 2003 and 2010, women killed by their current or ex- spouse or partner accounted for 53% of the victims. (Men are more commonly killed by someone other than their partner, such as officers responding to a domestic violence scene, or their partner’s ex). Since 2010 there have multiple incidents of men fatally shooting their wives and children and sometimes themselves in Oregon. In August 2012 a colleague of mine was fatally shot by her daughter’s estranged boyfriend, a convicted felon with a history of domestic violence. Her daughter was also shot but survived.

October is Domestic Violence Awareness month. On October 21, a coalition of local violence prevention and gun safety organizations held a Round Table with former Congresswoman Gabby Giffords and Americans for Responsible Solutions. ARS is the 501(c)(4) advocacy organization started by Giffords and her husband Mark Kelly after she retired from Congress in the wake of the 2011 mass shooting by a mentally ill man during a constituent event in Tucson. The Portland visit was part of a series of appearances and events for ARS’s #ProtectAllWomen campaign.

There were approximately 20 participants at the Round Table held at Grant High School, including both public officials and representatives from non-profits. Amanda Marshall, the United States Attorney for the District of Oregon, participated actively in the discussion, as did Oregon House Representative Barbara Smith-Warner (D45), retired Gresham police chief Carla Piluso and representatives from the Oregon Department of Justice, the ATF and Multnomah County Domestic Violence Services. Non-profit and advocacy organizations present included several domestic violence prevention and service agencies, The Q Center, the YWCA, the Oregon chapter of NOW, the Oregon chapter of the American Medical Association, Moms Demand Action and Gun Owners for Responsible Ownership.

Most of the discussion focused on background checks, inter-agency coordination and prevention of domestic violence through addressing the root causes (objectification of women, sexual violence, poverty and economic limitations for poor women and single mothers). ARS provided information on some background check legislation at the federal level, but there was a tacit understanding that attempts to regulate firearms in Oregon are difficult. To the extent there are administrative rules that can be changed to allow sharing information that may an opportunity to improve enforcement, but generally any attempt to even scrutinize gun sales draws comment from gun rights organizations.

ARS has two primary objectives, to increase background checks and reduce gun trafficking. If they advocate legislation specific to domestic violence or women’s services, it is secondary or incidental. However, the round table discussion was wide ranging because the organizers and ARS appear to want to build coalitions across a broad spectrum of interest groups. Also, effective domestic violence prevention is complex and the ideal policy goal is to prevent intimate partner assaults and homicide well before gun control is even in question.

Giffords herself made very brief and general prepared remarks at the beginning about preventing gun violence against women. The 2011 shooting left her with permanent speech, vision and walking impediments, but she travels frequently and is active promoting ARS’s objectives. The opportunity to participate in a dialogue with her even indirectly was both a draw and an inspiration for the attendees. Although no specific proposals came out of the evening, it drew a number of different groups to one place at one time to learn from one another. The degree of difficulty collaborating between state and federal agencies was clearly a surprise to a number of the attendees. Everyone appeared to leave energized.