Sen Ron Wyden’s staff was not prepared for what happened at his annual Multnomah County Town Hall, held at SCC Southeast on Saturday afternoon. When "Hands Up Pdx" demonstrators took over the meeting and stopped the Senator from taking questions, his staff scrambled for a way to regain control and let the town hall proceed.

In the end, the town hall was abandoned. The Senator met privately with anti-TPP activists; Rep Alissa Keny-Guyer, who was supposed to have served as moderator but was relegated to observer, noted the iron of those folks getting a more direct opportunity to share their concerns with Wyden than they would have otherwise. After most attendees had left, a number of protesters and activists gathered together in what amounted to a singing-to-the-choir (as most public demonstrations tend to be).

No one got to ask a single question of the Senator. I’m not sure anyone’s mind was opened or changed. Some were angry with the protesters; one woman was angry that Wyden didn’t respond to the “organic” nature of the moment and turn over the microphone to the protesters to let them speak. He did, actually, for far longer than I think many United States Senators might have done. Can you imagine John McCain or Mitch McConnell standing amidst “Hands Up” protesters for half-an-hour seeking a resolution to such a standoff? In the end, anger and frustration trumped civil discourse. Or at least cancelled a town hall. 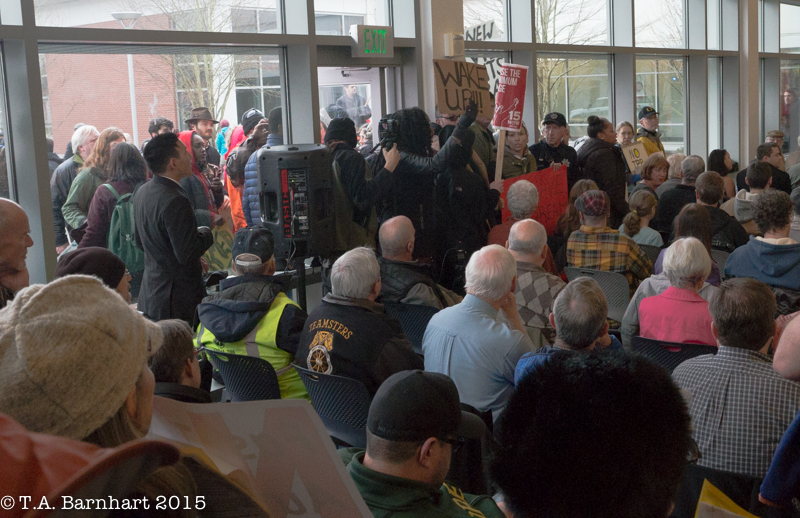 But in that peculiar kind of Portland way where even anger of this kind doesn’t devolve into the nastiness we see elsewhere. Anger, frustration, and not even the slightest hint that violence might be possible.

As I wrote on Facebook when first sharing the top photo, no one has a more just cause than Hands Up/Don’t Shoot. We know all too well in Portland how quick police are to resort to deadly violence. Across the country, the murders of Michael Brown, Eric Garner, Tamir Rice, and far too many others – not to mention the unjustifiable incarceration of so many people of color that the United States ranks as the world leader in the imprisonment of its own people – have led many African-Americans to believe they’ve reached the kind of turning point that Dr King and his peers faced.

In case, like me, you were too young or too distant to experience the civils rights movement of the 1960s, you can do so now, here and today. Hands Up is not going to shut up or go away. Nor should they. There is nothing civil about civil disobedience. Disrupting the town hall was upsetting to many, and I’m not sure how productive it was, but whatever mistakes are made, what Hands Up is doing is no different than what the young people did who sat down at the lunch counters half-a-century ago: demanding real change. 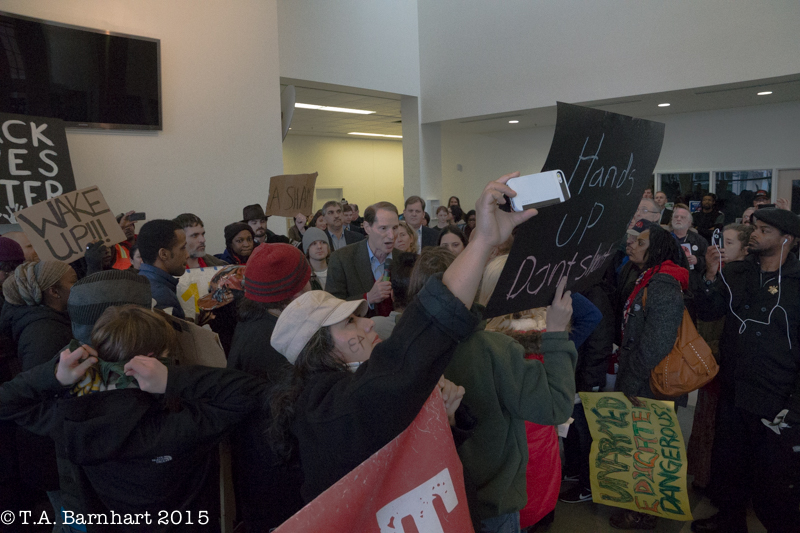 (Sidebar: When I see anger white people among the Hands Up protesters being part of those who wouldn’t allow the event to continue and let other grievances be heard, I get cynical. Like me, they are in little danger of being stopped for the crime of being white; they stand in a place of privilege in the eyes of the police. White people can and should stand in solidarity with African-Americans in this movement, but we will never be on the front lines as they are: our skin color will never make us the kind of target people of color are in the United States today.)

Afterwards, a woman talking to Rep Keny-Guyer said the current power paradigm needs to be changed. Paradigms, of course, cannot be changed by an act of will; they are meta-concepts that develop and shift over time (go read Kuhn). What we can do is change how we act.

Senator Wyden needs to meet with the protesters, of course, and he said he would; but he also needs to speak up on their behalf in the town he has chosen to make his home and raise his children. He cannot stay silent; he must be a voice for justice. The other Democratic members of our Congressional delegation need to speak against injustice in Oregon, and not in MLK Day conceptual terms that disturb and change nothing. 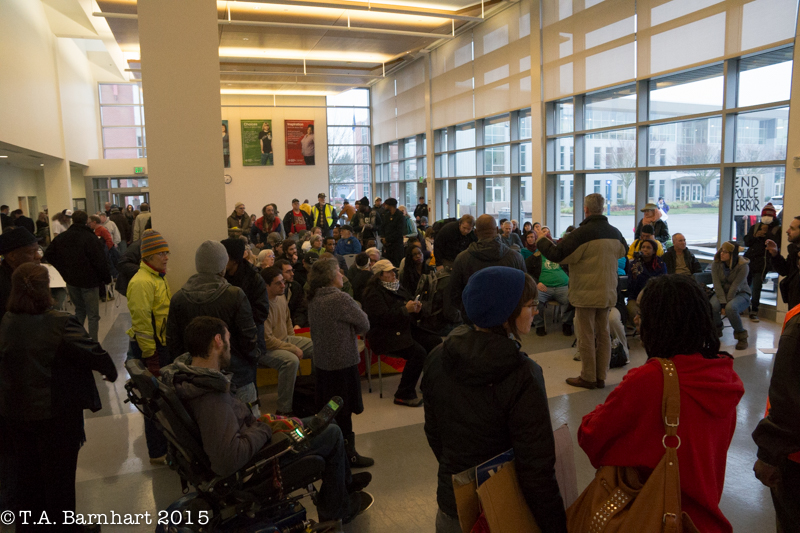 Activists on other issues, such as the TPP or the environment, have to look beyond the parameters of their own issues and begin to understand how all these issues are interconnected. It’s no accident that in our country, the worst polution generally occurs around communities of color or poorer communities. Trade agreements like the TPP don’t affect the high-paying white collar jobs or even local trades unions that build things “here”, but they undermine entire communities by impoverishing large segments of the workers upon which our capitalist edifice is presumably constructed. We are all in this together, in the same damn boat. Leaders and activists in labor, the environment, education, economic issues and more have to understandthat Hands Up and their organizations are connected and must support one another — both will lose.

Local elected Democrats have to speak up more. Yes, Lew Frederick has done so and has legislation being prepared for the Leg session that starts next month, but that’s what we’d expect from a man who integrated his high school in Atlanta. What about his colleagues? I know he has plenty of support, but it’s been too quiet. The City Council is giving the appearance of resisting the changes to the Police Bureau that the feds have ordered. The Multnomah County Commission deals with many of the street-level issues that are the results of institutionalized racism, and their efforts are, for the most part, well-intentioned. Where’s their voices?

Emails to constituents do not count as speaking-up.

And the rest of us, ordinary citizens struggling to cope with the on-going economic downturn, the recession that will not end, have to, every now and then, act in solidarity with those suffering injustice. I’m not saying we must all go out and chant “Hands up, don’t shoot?” (something I find unsettling coming from white mouths). But how many Portlanders have contacted the Mayor to demand that real changes be brought to OUR police bureau? (Cops that get paid with Portland taxes and live elsewhere, then insist the leaders and citizens of this city cannot tell them how to run the police bureau; how surreal is that?)

White Oregon has to stand in solidarity with Oregonians of color. This is no longer optional. The blood of Michael Brown, the last words of Eric Garner, the video of Tamir Rice being summarily executed by a white cop, the treatment of people of color across this country has to, at some point, lead all of us to act differently. To think differently. To stop being accomplices in the crimes against humanity with our silence.

And yes: count me guilty.