What's the price on serving the public? 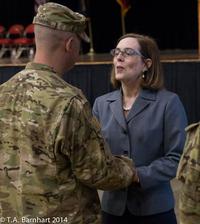 Kate Brown at Oregon National Guard MOB ceremony prior to Afghanistan deployment. May 2014.

Secretary of State Kate Brown was embarrassed (I hope) to have been caught signing a letter that was written for her by Comcast:

Portland and other opponents want the Federal Communications Commission to block the deal, or put strict conditions on it to protect subscribers.

Others, including Oregon Secretary of State Kate Brown, are enthusiastic supporters.

On Monday, the online tech journal The Verge looked at some of the letters of support from Comcast's political supporters and found they were ghostwritten – sometimes word-for-word – by the company itself. That isn't particularly surprising: Politicians often write letters of support at the behest of their supporters, and legislators frequently propose bills written by lobbyists. OregonLive.com

I took a look at Comcast’s donations to Oregon politicians to see where they were giving; to simplify, I only looked contributions since the 2013 short session ended. The grand total: $222,250 donated to Democrats, Republicans, “non-partisan” and even school bond campaigns.

One-quarter of a million dollars in less than two years to buy access to Oregon’s leading decision makers. And now at least one of those politicians is writing to the FCC to support Comcast’s merger with Time Warner. This is not cool.

I happen to think Kate Brown is an honorable person; I think it’s entirely probable she does support the merger for the reasons stated in the letter, whoever drafted it. Not every Democrat in the state supports the same things, after all; I have strong differences with labor, for example, on industrial issues that impact the environment. That’s life in a pluralist society.

However, the amount of money Comcast has poured into Oregon politics is troubling. I’ve included the full list of contributions below the fold; here are the biggest recipients:

(Oddly, Rep Peter Buckley’s two contributions were both for $995. Someone explain that to me, please.)

Obviously, Comcast is seeking to buy favor with politicians. They are also seeking to buy favor with those involved in school issues in order to be able to sell services to schools and school districts. They’re spreading the money around – the campaign funds for both Ds and Rs in the House and Senate get $10,000 each; we don’t want anyone feeling slighted – but Dems are receiving more for the simple reason that Dems are in power.

This is the deleterious affect of money in politics: good people who look bad because they accept legal and politically necessary contributions from public corporations – and they look slimy as a result. Has Comcast bought influence with Speaker Kotek by donating $8,000 to her in the past two years? Or is she taking their money and laughing all the way to the bank knowing she’s not doing to lift a finger for them?

How the hell can we know? I do know what she and House Majority Leader Val Hoyle and Senate President Peter Courtney and AG Ellen Rosenblum and newly minted State Representative Dan Rayfield and all the rest would say: Of course not. We serve our constituents and the people of Oregon. No amount of money can buy our vote.

But here’s the thing: We don’t know that. We have to take them at their word, and we have to take their word in light of the money they are accepting and putting into the campaign accounts. If I call Speaker Kotek’s office with a complaint about Comcast and what poor service they are supplying to my community, will that have the same impact as when Comcast’s lobbyist (or lobbyists; I don’t know how many they hire, but I’m betting it’s more than one) sends in one of those notes during a floor session and asks to speak privately with her or another member of the House.

Money is not speech. Corporations are not people. But the money corporations spread around is as ugly and nasty as any thug hired by an old-time ward boss in the bad old days of strong-arm politics. At some point, the politicians who agree that money has an over-sized place in politics have to stand up and act on that belief. They need to start refusing the attempted bribes of Comcast and the other anti-public corporations who exist to squeeze as much profit out of their ill-served customers as possible.

And when the politicians put principle before money, I do believe, at least on the progressive side, we’ll step up and have their back. After all, that quarter-million spent by Comcast in Oregon the past two years is money taken from us, their customers.

Shouldn’t we have a say in what that money buys?

Here is the full table of Comcast contributions to Oregon pols since 3/2014.