Anyone who bicycles regularly in Portland know this to be true: If we are the platinum standard for bicycling in the United States, then life on a bike must be pure hell in other cities. Because here in Portland, to commute by bicycle is to expose yourself daily to risks and hazards the automobile community would not tolerate.

And that PBOT would fix in a heart beat.

Here’s one example, a route travelled by many cyclists on a daily basis and a massive risk with each crossing. 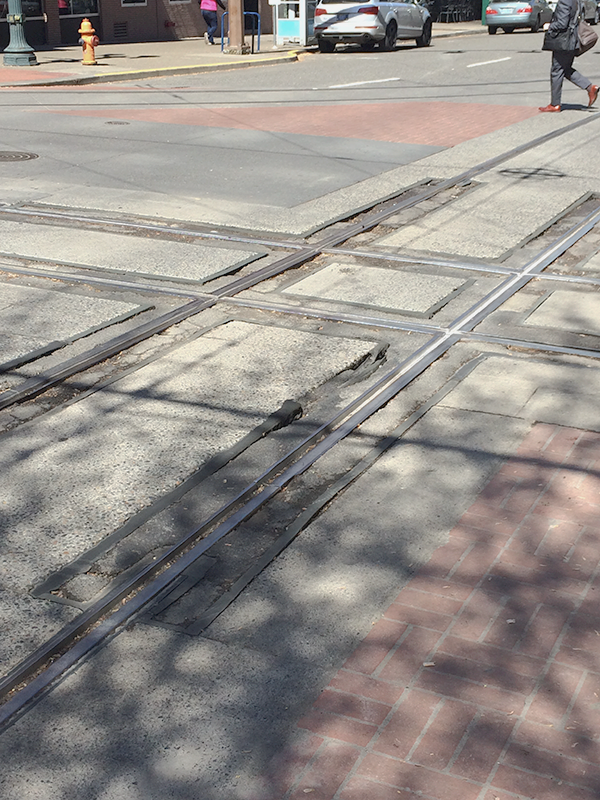 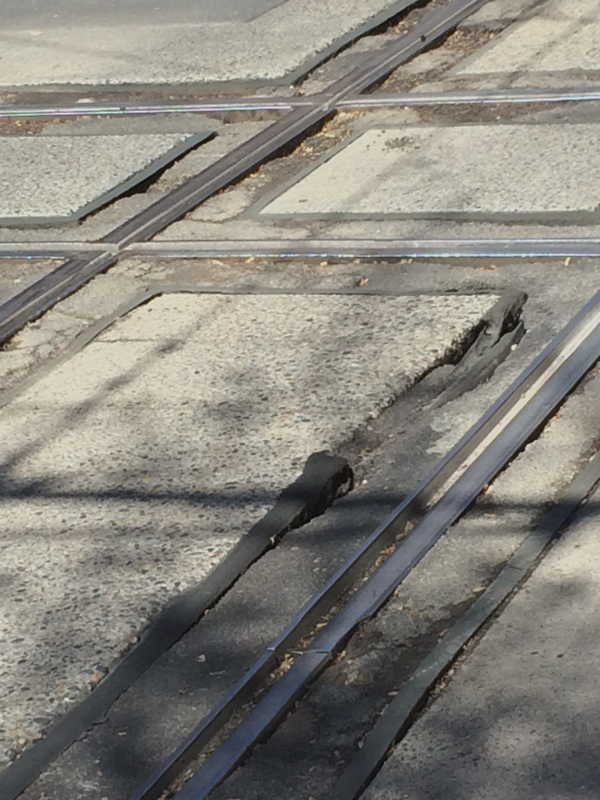 This is the intersection of SW Morrison and 10th. Rail tracks are a dicey deal at the best of times; if you don’t take them on with at least a forty-five degree approach, and hitting them square at ninety is best, you’re asking for disaster. But surround the rail with busted roadway, and it’s your basic World War II tank trap.

Yet this appears to be acceptable roadway to the City of Portland. No doubt if you called PBOT, you’d be told: Find an alternate route.

When would PBOT tell a motorist, Find an alterate route? How about, never.

I’ve given up trying to talk to PBOT. In 2010, following the Snowpocalypse in which tons of gravel was strewn across the city, there was little effort made to clean that gravel up after. On the route from off the Ross Island Bridge and around, under the bridge (SW Hood Ave), to the Lair Hill neighborhood where I worked, the gravel was flung onto the sidewalk. Which is where I spilled and broke my shoulder.

A week later, the gravel was gone. Thanks, Portland. You underfunded safety and I paid the price.

There are a few places of relative safety for bicyclists: the new route through inner southeast that is part of light rail construction; along NE Multnomah; the SW Broadway cycletrack; the fixes on Cully and Going. But for the most part, what cyclists are expect to tolerate are the “bikeway” along 41st, which, from Division up to Stark, is bone-jarring, teeth-chattering, bicycle-wrecking hell.

And, like most bikeways, used by cars for quick cut-throughs. NE Tillamook is the worst for that, of course; despite a 20mph limit the city refuses to enforce, cars regularly tailgate bicyclists rather than move over to Broadway or Weidler where they are supposed to be. Automobiles, of course, are granted the right to zoom without limit wherever they want; this is America, after all.

Bicycles are allowed the right to take their lives in their hands when trying to use roadways they pay for (the vast majority of Portland bicyclists also being car-owners).

Portland does eventually get around to fixing road hazards. Yes, it takes the death of bicyclists to do so, or a little girl crushed by a speeding driver, but a small price to pay to ensure that we do as little as possible to inconvenience the automobile. So – downgrade Portland?

Are you kidding me? We should downgrade ourselves and admit we’ve failed to live up to the hype. Let’s earn this certification, not pretend that being one of the “best” in the United States amounts to much. Riding a bicycle in Portland may be better than in most cities, but it’s still dangerous. And bicyclists are still second-class road citizens.