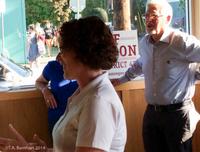 Here’s what I posted on Facebook, Sunday, May 24th, with this link to a post on Oregonlive:

So what we have are Oregonians sending Democrats to the Leg to pass good legislation & those same Democrats caving in to the Chamber of Commerce, AOI, and other industry groups. This is what happens when legislators have only minimal contact with the people who sent them to Salem (Come to my monthly coffee & listen to my excuses).

There is no excuse to not passing paid sick leave & ban-the-box. None. We didn't give our time, energy & money just so the Leg would cave on vital middle-class issues.

I fully expect that we will not leave the building without voting for a statewide sick leave policy and a number of other things that are important to working people and the middle class while also managing the budget process and individual district priorities for all members. Speaker Kotek and President Courtney are incredibly skilled at managing the legislative process and are both genuinely committed to doing what is best for Oregon and a thriving middle class in all parts of our state.

This is an example of the late-session anguishings that go on every two years. Many pieces of legislation take far longer to move forward than advocates want. Wrangling is happening. Lobbyists are wielding their hammers on electeds and staffers alike. Interest groups organize their supporters to spend one last day appealing their cause. And the political reporters try to craft stories where only speculation exists.

It’s that last part that is so crazy-making for citizens and electeds alike. For those of us on the outside looking in, we do not see progress, we read articles like this, and we begin to expect the worse.

Rep Hoyle tells me not to expect the worst.

I hope this means we'll get the paid sick time we hope for, but those of us who want to see a strong bill passed need be worried. The Chamber of Commece, AOI, the restaurant lobby, and others have the money to push their demands, day after day. The Democrats in the Leg need to hear from “ordinary” citizens from their district, especially those who are squishy on these vital working family issues or terrified that voting for popular measures supported by the majority of Oregonians will cost them their seat. If we want paid sick leave and an increase in the minimum wage and “ban the box”, we have to let our elected officials know.

We don’t have the money. We have to substitute our voices. And you folks reading BlueOregon know how that works, so get to it. Help your friends who may not understand how to call or write an effective letter. Every passing day allows the forces of repressive business practices to argue their case – and they are very good at it. If these bills fail, the fault will lay most heavily on us for not doing enough to beat the Chamber of Commerce and AOI.

I think it would be fair to evaluate us on the basis of what actually gets voted on throughout the whole session as opposed to just reacting to an Oregonian story before we are even finished.

I think you can trust we will do exactly that, Rep Hoyle.