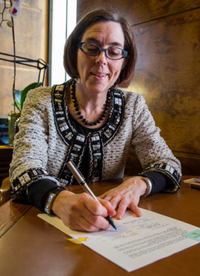 By Andrea Durbin of Portland, Oregon. Andrea is the executive director of Oregon Environmental Council.

Oregon’s pro-environment legislators made history this session. In one of the most significant environmental wins we’ve seen in Oregon since 2009, they stood up to multinational oil interests and passed legislation, signed by Governor Kate Brown, that secures a clean fuels future for Oregon.

Let’s take a moment to put this victory into context: the Clean Fuels Program reduces climate pollution, cleans up our air and encourages investment in our state – including an announcement of new jobs in Eugene just last week – creating prosperity right here in Oregon while breaking our dependence on oil. Oregon is the second state in the country to implement this law, but others, including Washington and Northeastern states, are already poised to follow our lead.

Oregon’s pro-environment legislators took this important vote in the face of over $2 million in lobbying and campaign expenditures by the oil industry in Oregon to stall, sidetrack and roll back this landmark program. The oil industry was helped every step of the way by its faithful sidekick, a paper I like to call the Oilgonian, which – despite claiming that climate change is not an issue worth discussing – has published over a dozen anti-climate legislation editorials and op-eds this year alone.

So why would the legislature consider rolling back its own hard-earned win?

Opponents of clean fuels say they can’t pass a transportation package if the state has a clean fuels program. If you believe that claim, Brian Williams has a story about a chopper to sell you. Here’s why:

Let’s stop to think about that last one. If clean fuel’s champions bow to opponents’ demands now, but there still aren’t the votes for a gas tax increase, that means Oregon will have neither a transportation package nor a clean fuels program. Taking this leap of faith is like Charlie Brown taking another kick at a football that will never be there. Opponents have already taken their toys and gone home.

Clean Fuels is a landmark victory that is essential for giving Oregonians cleaner fuel options that will clean up our air and drive investment and jobs into our local economy. Now -- as we see the climate changing all around us in droughts and wildfires, acidifying oceans, and increased asthma rates -- is not the time to take a step backwards. Now is the time to look forward and lead.