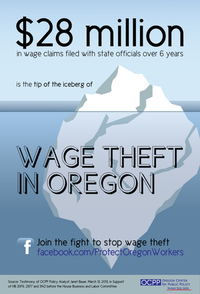 Combating theft — especially stealing from some of the most vulnerable Oregonians — ought not be controversial. It should be a moral and economic priority for all of our elected leaders.

So it is frustrating to see the Oregon legislature sit on a bill (SB 718) that would help stamp out wage theft.

Why are Oregon lawmakers reluctant to crack down on thieves who steal from workers? I suspect that business lobbyists have pushed back against the wage theft bill, arguing that the legislature has already given too many benefits to workers this legislative session at the expense of businesses.

The wage theft bill is not about new benefits for workers. Rather, it’s about law enforcement. It’s about giving the most vulnerable workers tools to collect their stolen pay.

Honest employers — those who don’t steal — would benefit from the wage theft bill. The proposed legislation not only better protects workers, it also creates disincentives for businesses that would contemplate undercutting their honest competitors through unscrupulous practices.

With no shortage of evidence that wage theft is widespread, it would be shameful for lawmakers to go home without doing something to protect Oregonians who are victimized.

The Oregon Center for Public Policy has counted tens of millions of dollars in wage claims filed with the Oregon Bureau of Labor and Industries in recent years. These claims filed with BOLI are just the tip of the iceberg, given the understandable reluctance of many workers to file claims against employers, for fear of retaliation.

More recently, a U.S Department of Labor study (PDF) found that minimum wage violations — one form of wage theft — push families into poverty and create costs for the public.

What is the Oregon legislature waiting for? Our lawmakers should strengthen law enforcement by enacting the Fair Wage Recovery Act, SB 718. To do nothing would hand a victory to unscrupulous employers who are cheating their workers and harming Oregon’s business community.