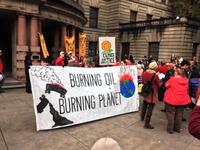 By Jim Diamond of McMinnville, Oregon. By day, Jim is a theoretical and physical chemist, Professor of Chemistry at Linfield College in McMinnville; by night, he is chair of the Collins View Neighborhood Association. Jim lives in SW Portland with his wife Maureen; he blogs as time allows at The Onymous Guy.

A crowd had gathered outside City Hall an hour before the meeting. There were cheers, songs, speeches, music, and plenty of networking before going into city hall.

The session started with this item on the agenda:

We then moved on the main items on the agenda, items 1156 and 1157, related to the ban on oil trains and development of infrastructure supporting fossil fuel transport through the city. These resolutions were introduced by Mayor Charles Hales, who chaired the entire session. He then asked Commissioner Fritz to speak. Fritz staffer Cristina Nieves and sustainability manager Michael Armstrong, Bureau of Planning and Sustainability, spoke about a few technical aspects of the resolutions and answered questions from the commissioners. Each was quite impressive in their alacrity.

Then came the testimony – first, organizations and businesses, including Regna Merritt, Healthy Climate Program Director, Physicians for Social Responsibility; Dan Serres, Conservation Director, Columbia Riverkeeper; Michael Lang, Conservation Director, Friends of the Gorge – who said these trains would move 15 million gallons a day through the gorge – followed by Cager Clabaugh, Vancouver International Longshoremen’s Union, who transfixed the audience when he said “As workers on the waterfront, we could be stuck between the burning train and the water.”

There were many, many others, including Carlos Smith, Confederated Tribes of Warm Springs, Columbia Intertribal Fish Commission, who referred with pleasure to the council’s earlier declaration of November as Native American Month; Javier Hurtado, owner of the chain of Cha Cha Cha's, who was brief but eloquent in demanding sustainability, Mia Reback, 350PDX.org, and then a huge surprise - Bill McKibben via Skype! (“Portland will be making history!”). The audience cheered after Bill spoke.

There was much more testimony – each person limited to two minutes. We were told that at one point nearly two hundred people had asked to testify. Those speaking before the council and the mayor included kids from Sunnyside Environmental School, two trios of 6th graders from Metropolitan Learning Center - all received with enthusiasm by the commissioners and the mayor – and then quite a few others.

Portland Rising Tide spoke, and The Raging Grannies sang to the mayor and commissioners! Andrea Voss, PDX350; John Talberth, economist, Center for Eonomic Sustainability; Oregon League of Conservation Voters, and many many more. Andy Maggi, director, Oregon Chapter Sierra Club; Eric LaBrant, newly elected Port of Vancouver Commissioner, who electrified the audience when he repeated his personal opposition to the oil trains and said that was the platform on which he ran. Each person’s story was interesting and each had a particular point of view. It was just an extraordinary feeling to be in this room with all of these amazing people – of mixed ages, genders, and ethnicity - who are determined to liberate Portland from the coal lobby’s clutches.

Not everybody supported the resolutions. There were a few Anti-s – but hundreds supporting the measure! The Portland Tribune did a good job in reporting on those opposed to these resolutions

The commissioners spoke briefly before announcing their votes. The mayor made it clear that he thought this was a historic moment for the City of Portland, and he was determined to be on the right side of history. When his final vote came, the audience stood and cheered. It was not anti-climactic; it was thrilling! The brief video from 350.org captures the spirit.