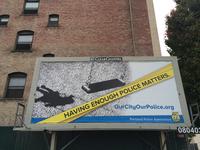 By Lisa Schroeder of Portland, Oregon. Lisa is the executive chef and owner of Mother's Bistro & Bar in downtown Portland.

I am so disheartened to see so many billboards around town advertising “Having Enough Police Matter.” It is appropriating #blacklivesmatter, a phrase intended to raise awareness of excessive use of force by police on the African American community. Is this the best the Portland Police Association (PPA) could come up with?

As a business owner who attracts many tourists, I am embarrassed that this is what tourists see while taking in all that Portland has to offer. The message that our visitors are receiving is that our police are not at all sensitive to the excessive force they’ve used in the past; the force that has caused unnecessary deaths of people in their custody. Visitors see that our police want to undermine the fact that BLACK LIVES MATTER, since even using a semblance of that slogan downplays its significance. It is creating an unfair grudge match, asking citizens and visitors alike: what matters more, a black life or a police officer’s? There is not a winner when this is the question and the losers are all of us who want and expect a responsible police force.

There are many ways to raise funds for more police, not the least of which are our taxpayer dollars. If more police are needed, why aren’t their proponents campaigning for a ballot measure or working with City Hall? Why spend thousands of dollars on billboards that do nothing to affect the change required to get our lawmakers to budget more money for more officers?

The Portland Police Association adopted this tagline at a time when the national struggle with racism seems to have reached a critical tipping point. More people of all races are seeing the disparity in police treatment of our communities of color and asking for it to stop. These signs serve to de-legitimize the very important Black Lives Matter movement. It detracts from the urgent need to contemplate the rampant racism issues our society continues to face, including within our police force. I hope for all our sakes and those of my guests that these billboards are not reflecting a crime-ridden, negative image of Portland with a focus on the same old agendas that do nothing to foster an inclusive approach.