CHART: How do the minimum wage proposals stack up?

In an effort to shine a little light, I thought I'd actually stack up the various proposals against each other for you. (Update: I neglected to include the Raise the Wage proposal in my first edition of this post -- so it's now included!)

For starters, under current law, Oregon's statewide minimum wage is $9.25. It goes up every year against the inflation rate, rounded off to the nearest nickel. It didn't go up for 2016, due to a low inflation rate that didn't trigger another nickel -- dropping our ranking from #2 to #8 in the nation.

Governor Brown proposes raising the statewide minimum wage to $13.50 in 2022, also with bumps along the way. In addition, she includes a 15% premium in the Portland metro area -- setting an effective $15.52 wage in the region by 2022.

That's all a bit confusing, so I put together a little chart and a graph for you below.

(An important note: the italicized values are assumed inflation-based increases in the minimum wage. I assumed 2.28%, which is the average inflation we've seen over the last ten years. Obviously, that's a guess -- but it's an educated one.)

So, what do you think? Which option is the right one? How do you weigh the pros and cons on the policy and the politics? 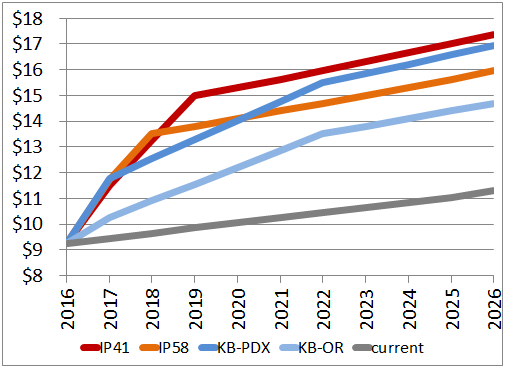