Bailey: How much will he owe PPA?

On March 7, Jules Bailey got the endorsement of the Portland Police Association, the cops’ union. Here’s the final paragraph of The Oregonian’s article:

Bailey's political consultant, Stacey Dycus, has connections to police work. She worked on efforts to save the mounted patrol and, more recently, with the union on last year's billboard reading: "Having enough police matters."

And in case you don’t remember that billboard – 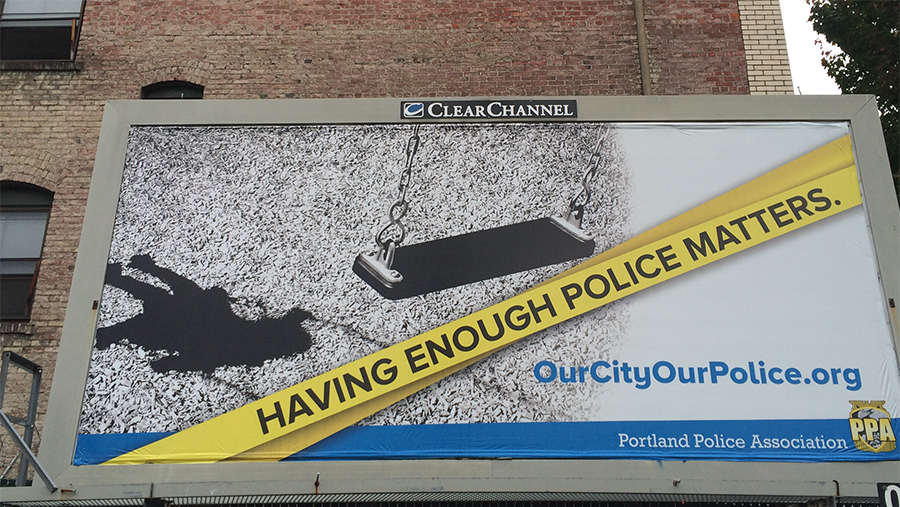 A Black Lives Matter banner hanging from the First Unitarian Church in downtown Portland since just after police killed Michael Brown in Ferguson, Missouri has a new neighbor: A billboard displaying the message, "Having Enough Police Matters," that went up Tuesday on the next block.

And here is the original #BlackLivesMatter banner – 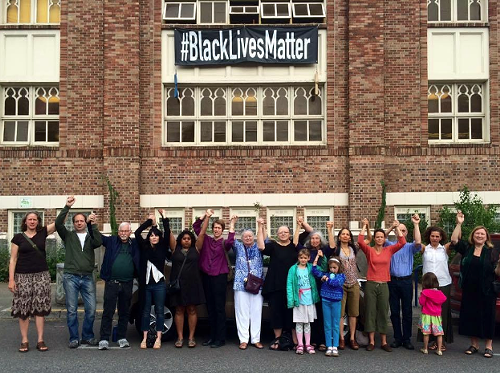 Here’s Dycus in the same Merc article, stretching credibility to the breaking point:

Stacey Dycus said she sees absolutely no reason why anyone would connect the "Black Lives Matter" banner to the "Having Enough Police Matters" sign down the block, and asked the Mercury to explain.

Apparently she said this with a straight face.

A reminder: Dycus is the campaign consultant for Jules Bailey, and Bailey got the PPA’s endorsement for Mayor. He also is the only candidate to unequivocally not say he’d get rid of the “48-hour rule”, a contract provision that gives a Portland cop 48 hours after a shooting incident to come up with his or her story to justify the shooting – presumably, in consulation with the union and their lawyers.

At a forum Thursday on social justice, Bailey danced around the subject before moderator Jo Ann Hardesty, a former state legislator, tried to force him to give a yes or no answer on whether he supported eliminating the provision. … "What I heard from Ted Wheeler and Sarah Iannarone was unequivocal support for eliminating the rule," Jason Renaud, another moderator at the forum, tells WW. "What I heard from Jules was equivocation."

(You can see phone video of Bailey’s response at WWeek.)

Ted Wheeler, on the other hand, said this:

"I would work hard to eliminate the 48-hour time period”.

(I am a long-time Wheeler supporter but have no official connection to the campaign. This post reflects my views only.)

The U.S. Justice Department, as part of its work to fix some of the most egregious failings in the Portland Police Bureau, has called for an end to the 48-hour rule, something the cops are loathe to do. (Charlie Hales promised to get rid of the rule in 2012; he has now punted on that. Hales did not get the PPA endorsement but beat their preferred candidate, Jefferson Smith.)

Even The Oregonian’s Editorial Board has called for doing away with the 48-hour rule.

But if Jules Bailey gets elected mayor, it’s an open question if he’ll follow the DOJ’s guidance or kowtow to the cops who endorsed him (and, I assume, will work to get him elected). With his campaign consultant connected so closely the police union (her firm, ProspectPDX, led the effort to restore funding to the mounted patrol), a significant conflict of interest already exists.

Working with Dycus and Bailey, the cops are already getting what they want. If he becomes Mayor, what price with the Portland Police Association demand in return? Would a Bailey administration be able to hold the line in contract talks and get the 48-hour rule removed? What other concessions might they expect?

The cops and their union seem to think Jules Bailey and Stacy Dycus are their best bet to maintaining their 48-hour window for shielding officers from justice when they gun down civilians.