If Raiford had been found guilty, questions would’ve been raised about the selective nature of the proceedings against her, and whether she had been targeted for arrest and prosecution for no other reason than being a “thorn in the side” of Portland police. 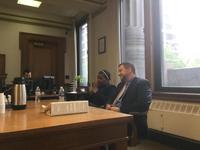 On the fourth day of the trial of Don’t Shoot Portland founder Teressa Raiford—one that also included an at-times testy exchange between Raiford and Prosecuting Attorney Jeffrey Lowe—the jury found her not guilty of the disorderly conduct charge she was arrested for at an August 9, 2015 Black Lives Matter protest in Southeast Portland.

The trial was atypical in the fact a jury even deliberated the charges against Raiford in the first place—an unusual outcome for a misdemeanor charge. Along with Judge Greenlick finding that no probable cause existed to justify Raiford’s arrest (yet allowed for the trial to continue), two prosecutors teaming up to argue the state’s misemeanor charge, and testimony provided by a state’s witness that conflicted with pre-trial statements, there were doubts raised by observers as to whether the Multnomah County’s District Attorney’s office sincerely sought to follow the letter of the law in pursuing the charge against Teressa Raiford.

In fact, viewed with hindsight perspective after a “not guilty” verdict was provided, this case was a situation in which the D.A.’s office couldn’t win. If Raiford had been found guilty, questions would’ve been raised about the selective nature of the proceedings only against her and whether she had been targeted for arrest and prosecution for no other reason than being—in her words—a “thorn in the side” of Portland police.

While the idea that individuals could be targeted for arrest simply by loudly speaking unwelcome truths is chilling enough--but a guilty verdict for Raiford could potentially have had further consequences in regards to political speech in Portland and Multnomah County.

The Importance of Disruption in Political Speech

The ability to disrupt is a key component of effective political speech. Without this component, political speech is rendered “sanitized” and toothless. Consider the “free speech zones” present at campaign stops when George W. Bush ran for re-election in 2004, designated spaces far removed from the main event in which protestors could exercise their free speech rights without the ability of having any impact.

Compare this version of “approved” free speech to the “Black Brunch” protests that occurred throughout the country last year, in which Black Lives Matter protestors would enter trendy restaurants in (Nearly all-white) hipster neighborhoods and read aloud a list of black civilians killed by police officers to clearly uncomfortable diners. A Black Brunch organizer from Baltimore told MSNBC that inconvenienced diners acted as if “The worst thing in the world had happened to them.’ Never mind, of course, that the harsh reality of communities being torn apart by brutal killings of young unarmed men at the hands of uniformed police. How dare such truths interfere with the enjoyment of one’s Bloody Mary?

Were the disruptive tactics effective? Absolutely. Did they create a nuisance? Of course they did—they were designed to do so.

Of course, a commonly accepted definition of disorderly conduct is to engage in behavior that intentionally causes an inconvenience or annoyance. Those Black Brunch protestors were certainly a nuisance when they exercised their free speech rights at the inconvenience of hipster brunch diners. Where does the line between exercising free speech and being a public nuisance exist?

The State Fails to Bear the Burden of Proof

The state was tasked with the burden to prove that by joining a group of 100 protestors who exited the Jade/APANO Multicultural Space and helping occupy an adjoining intersection for several minutes, Teressa Raiford should solely be held responsible for the group’s actions. And that the police acted appropriately when arresting her at the protest’s conclusion—when traffic was flowing freely through the intersection—and Raiford was one of a handful of people acting as “safety patrol,” herding protestors back onto the sidewalk.

After listening to witness testimony, the jury needed less than three hours to deliberate and reject this argument.

Without being able to speak with a member of the jury, I can only surmise at the machinations that led to them unanimously rejecting the state’s case. It’s hard to imagine, however, that Raiford’s testimony for her defense played a not-too-small role in swaying jurors’ minds.

Not too surprisingly, the line of questioning between Raiford and her attorney Matthew McHenry portrayed Raiford in a sympathetic light: a successful businesswoman visits Portland from Texas for a two-week visit and loses her nephew to gun violence during this stay; leaves her life in Texas behind to focus soely on being an activist and organizer in Portland; meeting with Michelle Obama and testifying in front of Congress; being invited by Mayor Charlie Hales and Police Association President Daryl Turner to work with Portland’s Gang Task Force and reduce gun violence in Portland.

In response to McHenry, Raiford spoke of her desire to effect policy and create change, working with Black Women for Peace and the Oregon Assembly for Black Affairs to enact policy and pass legislation. When asked about why she founded Don’t Shoot Portland, Raiford pointed out that although Portland enjoys a reputation as a very progressive city, it also contains the same elements that criminalizes poverty found elsewhere. After Michael Brown’s death in August of 2014, Raiford was surprised that Don’t Shoot Portland lasted beyond the initial rally and protest.

Of course, due to her role as a community activist who draws attention to the deaths of black civilians caused by uniformed police officers, Raiford has had her share with run-ins. Along with a number of complaints filed against the PPB, Raiford’s call to audit Portland’s police was a key component in her 2012 City Council campaign. Considering this history, McHenry asked if it was fair to say that her name “was out there” in regards to the police. “Yes,” was Raiford’s one-word reply.

Prosecutor Lowe’s cross-examination never seemed to get on firm footing beginning with the initial exchange with Raiford. After asking whether she was “quite upset” about getting arrested that day, Raiford calmly responded, “I’m not upset that I was arrested. I’m a protestor, I look for opportunities to spread my message. This arrest allowed me to spread my message here in the courtroom. Thank you.”

This exchange set the tone for the duration of the cross-examination, which led to several testy back-and-forths between Lowe and Raiford. While never amounting to the level of a hostile witness, Raiford’s reluctance to provide Lowe the answers he desired resulted in Lowe clearly expressing frustration. (It also crossed my mind that Lowe was just projecting frustration in an attempt to get a rise from Raiford, which never happened.)

Although the jury ultimately rejected that state’s argument that as she stepped into the street Raiford was guilty of disorderly conduct, I cannot infer whether they accepted McHenry’s argument that Raiford was targeted for arrest due to who she is and the high-profile role she plays as a racial justice activist in Portland.

An audible sigh of relief was shared by Raiford and her supporters in the courtroom, satisfied that the legal process had come to an end with the jury’s call for acquittal. Raiford was free to go and begin planning the next action in her ongoing efforts to demand accountability and transparency from the Portland Police.

When asked to provide a comment on the jury’s verdict and the overall proceedings, Raiford’s attorney Matthew McHenry provided the following statement: “We are grateful to the jury for seeing this case for what it was--a deliberate attempt to silence and intimidate Ms. Raiford. I was honored to represent Teressa, and applaud her courage and passion.