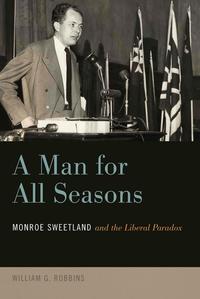 By Grant Schott of Portland, Oregon. Grant is a union organizer and political activist.

Although not a household name, Monroe Sweetland touched many lives as a public figure and private citizen, and is still considered by many the pioneer of Oregon’s modern vibrant Democratic Party. Granted access to Sweetland’s voluminous files housed at Oregon Historical society, Oregon State University History professor Emeritus Bill Robbins wrote and OSU Press published “A Man for All Seasons: Monroe Sweetland and the Liberal Paradox”

Born in Salem in 1910, where his physician father was a popular football coach and athletic director at Willamette University, Sweetland’s family moved to Michigan when he was two. After college in Ohio, attempts law school in Cornell and Syracuse were forever interrupted by his twin loves of politics and his wife, Lil, who often supported the young couple.

Sweetland first became an organizer with the League for Industrial Democracy and then moved to Oregon in 1935 to lead the Oregon Commonwealth Federation, which faced an uphill battle against conservative Democrats as well as Republicans. The author describes in detail Monroe’s ambitious organizing in both roles as he tried to balance his youthful Socialism with opposition to small but vocal Communist influence in both groups. Never as powerful as its Washington counterpart, the OCF was short lived and underfunded, however, they successfully engineered the 1938 Oregon Democratic Primary defeat of conservative Democratic Governor Charles Martin. Sweetland coordinated that effort behind the scenes with members of President Franklin Roosevelt’s inner circle.

Struggling finances and a daughter Barbara (followed by Rebecca 17 years later) led the Sweetlands to D.C. where Monroe distinguished himself leading the field operations for the Congress of Industrial Organizations War Relief Committee. He then served with the American Red Cross in the Pacific Theater, while taking a courageous stand against Japanese American internment.

The end of the war brought them back to Oregon, where Sweetland first tried to build a newspaper business with the help of prominent friends and- per correspondence unearthed by the author- sometimes frustrated benefactors Jebby Davidson, Dan Goldy, and Ancil Payne. Although the Sweetlands decade long ownership of the weekly Milwaukie Review was ultimately profitable- in part because of Lil’s hard work- Sweetland lacked business acumen, and newspaper ventures in Newport and Molalla were short lived.

Sweetland’s real passion and talent was political organizing, and he set out to build a New Deal model Oregon Democrat Party virtually from the ground up. There were no statewide Democrats in the mid 1940’s and fewer than 10 Democratic legislators out of 90. Monroe’s 1948 Primary victory as Oregon Democratic National Committeeman is still regarded as an Oregon political milestone. The lack of a Democratic bench made Sweetland President Truman’s go to guy in Oregon and gave him input over patronage. He successfully persuaded Truman to appoint former ODF member Gus Solomon as a federal judge, and Solomon’s improbable confirmation emboldened the fledgling liberal wing of the party.

Sweetland’s sometime ally and sometime antagonist, Howard Morgan, became chair of the Democratic Party of 1952, and the two were viewed by the Oregon political press as an organizing Dynamic Duo. The Eisenhower’s administration opposition to the growth of public power- highly popular in the Pacific Northwest- gave them their opening. Democrats saw key victories in 1954 with the election of Edith Green and Richard Neuberger to congress, followed by Senator Wayne Morse re-registering as a Democrat the following year. Although Democrats enjoyed a near seep in 1956, Sweetland narrowly lost the Secretary of State’s race to State Senator Mark Hatfield. Then and even more in a second SOS loss in 1960, his past Socialist ties hurt him during the age of McCarthyism.

Elected as State Representative from Clackamas County in 1952 and as State Senator in 1954 (re-elected in ’58) Monroe was a leading liberal voice in the legislature along with Robert Homes, who was elected Governor in ’56. Sweetland helped lead the fight for public accommodations and expanded education funding and against bills advocating for right to work and to publicize the names of all public assistance recipients. As chair of the Senate Education Committee, Monroe was the driving force behind the creation of Portland State University.

During the heyday of the Oregon Democratic primary, Sweetland was a key 1956 supporter of primary winner Adlai Stevenson, a figure revered by Oregon Democratic activists. Despite his friendship with Senator Hubert Humphrey, support for a Stevenson draft, and the "favorite son" candidacy of Morse; Sweetland was an early backer of Senator John F. Kennedy in 1959. He campaigned with JFK on his many Oregon appearances leading to his May 1960 primary victory. The author reveals the Sweetlands’ disappointment when behind the scenes efforts for a post-election appointment fell through, while Morgan- no fan or primary supporter of JFK- won a seat on the Federal Power Commission.

After leaving the Oregon State Senate at the end of 1962, the Sweetlands traveled the world and lived in Indonesia for a year, where he taught journalism at a university. The author hints at connections with CIA operatives in a country with a soon decimated but then active Communist party, but no solid evidence of CIA involvement was discovered.

Returning to the U.S. in 1964, Sweetland became the Western States Political Coordinator for the National Education Association, where he was considered by many as the father of the Bilingual Education Act of 1968. Sweetland was an equally big booster of lowering the voting age to 18 (or 19.) The “Go 19” initiative on the Oregon primary ballot in the 1970 primary to lower the voting age was soundly defeated, but it won Sweetland a new friend and admirer for the rest of his life in its chief organizer, Earl Blumenauer.

Having lost Lil in 1985 and his vision gradually staring at around that time, Sweetland eventually gave up a post NEA horticulture business, and moved back to Milwaukie in 1994. Monroe was a regular at Democratic and civic gatherings such as Portland City Club, and became a friend and mentor to a new generations of Oregon Democrats, myself included. In March 1998, Sweetland filed for his old State Senate seat against his new friend, moderate Republican Vern Duncan. The two often traveled to events together, and Monroe won a respectable 44% of the vote.

Sweetland died at age 96 in September 2006. Longtime friend Mike Katz presided over the memorial service at PSU, and Governor Ted Kulongoski was among the eulogizers. At the conclusion of the service, the hundreds gathered sang, “This Land is your Land.”

Those who knew Monroe will definitely appreciate this book, as will anyone with an interest in the Oregon history that he helped shape.