Wishes and magic aren't options to fill gaping billion-dollar budget holes. There is no fairy godmother who will come and save the day, waving her magic wand to provide the necessary revenue to fund mandatory high school vocational and technical programs. 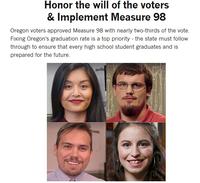 Stand for Children is really hoping you will sign their disingenuous petition to force Gov. Brown to spend money the state doesn't have

This week, Governor Kate Brown will release her proposed 2017-18 budget, which will include over $1 billion in funding cuts. This means that revenue will not be available to fund high school vocational and technical programs, as mandated by Oregon voters with the passage of Measure 98 on Election Day. In response to the lack of earmarked funds for these programs, Stand for Children Oregon--one of the the main sponsors of Measure 98--has instigated a public relations campaign to put pressure on Governor Brown to fund these programs, as per voters' wishes despite the state's billion-dollar budget hole. This PR campaign is a cynical and disingenuous ploy by Stand for Children, who knowingly convinced voters to approve this unfunded mandate in the first place.

Indeed, if one thing has become very clear in the weeks after the election it is that those Oregon voters who voted "Yes" on Measure 97--which would've raised taxes on corporate sales over $25 million to provide funding for much-needed state services--and who also voted "No" on Measure 98's unfunded mandate have proven to be correct in their choices. Sadly, they were also in the minority, resulting in the Governor of a cash-strapped state having no choice but to deny funding for programs supported by a majority of voters, however popular these programs might be.

It is easy to understand why a measure requiring mandatory vocational and technical high school courses easily passed by a wide margin. A skilled and knowledgeable workforce is necessary if Oregon's growing economy is to keep pace with other states and ensure the state is a magnet for twenty-first century industry. But the reality is that the State requires funds to provide not only these courses but other popular services supported by a majority of Oregon residents. However, contrary to what many people appear to believe-if the election results are an indication---wishes and magic aren't options to fill gaping billion-dollar budget holes. There is no fairy godmother who will come and save the day, waving her magic wand to provide the necessary revenue to fund mandatory high school vocational and technical programs.

No amount of signatures called for by Stand for Children to force Governor Brown's hand is going to make the required revenue magically appear. Although it's been tried many times before, the adage "you can't get nothing from nothing" has also been repeatedly proven correct.

In regards to supporters of Measure 98 who are now demanding Gov. Brown earmark funds despite state's billion-dollar budget hole and who might also have rejected Measure 97, calling the latter measure's page-long text "confusing" and "terribly written": did you even bother reading the pages of dense legalese that comprised the text of Measure 98? If so, I assume that these voters knew all along that Measure 98 was an unfunded mandate. And if so, then the current outrage towards Gov. Brown for not providing funds is...what, exactly? Purely spectacle? Just for show? Or perhaps its an admittance that these voters truly didn't understand Measure 98, which was a good idea sold under false pretenses.

And to those voters who rejected Measure 97 because there was "no guarantee" the funds would be spent in the classroom, yet voted for Measure 98's unfunded mandate: I sure hope you're paying attention. Please tell me that the irony is not lost on you.

There is a lesson here, which I'm sure Stand for Children--which has a long anti-public education, pro-corporate school reform track record--will ignore. By forcing the state to cut other school programs to fund mandatory vocational and technical programs--in effect, robbing Peter to pay Paul--Measure 98 proves to be an anti-public education poison pill. If you try to force a poison pill down everyone's throats, the only thing you're going to accomplish is to make everyone sick.