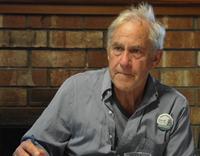 (i am posting this on behalf of my friend, Gerritt. TA)

I am Gerritt Rosenthal, and I am running for Chair of the Washington County Democrats.

Every two years, shortly after the General Election, county political parties in Oregon conduct “Organization” meetings. Elected Precinct Committee People (PCPs) elect (or re-elect) party officers and other party positions. In many cases, these elections are mundane affairs; sometimes, however, they reprise the recently held election. In 2016, here in Washington County, this is what we’re seeing in the race for Chair of the Washington County Democrats: multiple candidates, campaigns, and some serious disagreements as to the way forward for our party.

When the Washington County Democrats meet to elect officers on November 19th, there will be contests for many of the positions. Of greatest signficance is the race for Chair with three candidates for the position. One is Rosa Colquitt, the current Chair, who is seeking a second term. Louise Curran, a long-time activist and former educator, is the second.

I am the third.

This will be a friendly contest between the three of us. I have a great deal of respect for both Ms. Colquitt and Ms. Curran. Our differences are, in the main, about our approach to the position, not our values. This difference, while collegial, is important to the future of our party.

Here is why I am running to be the Chair of the Washington County Democrats.

I want to capitalize on the waves of optimism and energy released during the Primary campaign. While I am now a strong supporter of Hillary and am awed by her lifelong history of service and commitment, I was a Bernie supporter during the primary. I feel he captured what many Dems believe is a need for fundamental change, including within our party.

To be more specific:

I want our Democratic party to engage and support the optimism, energy, and idealism of the younger generation.

I want to expand the use of modern media and educational tools.

I want to merge the experience and knowledge of our established “old guard” Democrats with the energy of newly engaged activists.

Our party is strong because of our values and because of the continuing commitment these “old guard” members have made. This includes, of course, me.

I have been active as a Washington County Democrat since the early George Bush days. I have run for office several times – twice for HD 37 and once for Metro – so I am quite familiar with campaign processes and problems (especially the problem of being told by party leadership that “You’re on your own”). I have been a volunteer and activist on many others. I believe I know what our candidates face when they seek election.

I have been Platform Chair for the Washington County Democrats for nearly four years and am also a DPO Central Committee Delegate, a House District Leader, a Neighborhood Leader, and an elected PCP for many years. I’m not a party member who shows up now and then; I have given my time, energy, and money to the party for years. I am a fully committed Washington County Democrat.

I was Platform Chair for the DPO from 2013 to 2015. I believe in an activist DPO Platform Committee, one that reflects the progressive goals of Oregon Democrats. We met frequently to craft a progressive platform, and I believe we succeeded with the current DPO Platform — in a significant part because of my leadership.

I was replaced as Chair in 2015; I believe DPO Chair Frank Dixon did so because I was too activist. If so, I gladly wear that label. To re-purpose Goldwater’s phrase, activism in the defense of progressive change is no vice. (And to quote him directly, “moderation in the pursuit of justice is no virtue.”)

I understand we cannot “instruct” our elected representatives what to think or how to vote, but we can be more active in creating a dialog on the key issues facing us. We can, and should, use the party’s resources – our people, our money, and our values as projected in our platform – to persuade elected Democrats to represent the values of those who actually put them in office (admittedly, a large and diverse group, but anchored by Democrats).

In addition to my activism with both county and state Democrats, I volunteer extensively with Tax Fairness Oregon, Onward Oregon, OLCV, OEC and Oregon Wild. I pride myself on being fair. I believe strongly in activism, openness, and inclusivity. My progressivism is policy-oriented: I had a career, in both the public and private sectors, combining science and public policy.

I am asking my fellow Washington County Democrats to join with me in this effort and elect me as your next Chair.