Boom! Oregon is almost certain to get a SIXTH congressional seat.

It's late December, which means it's time once again for the Census Bureau to release its latest population estimates for each of the 50 states, and time for me to play population data nerd. For nearly a decade now, I've been tracking Oregon's progress toward a sixth congressional seat.

And with greater certainty than ever before, I can say that Oregon WILL get a sixth seat after the 2020 Census. In fact, for the first time ever, if the reapportionment were done today, Oregon would get a sixth seat. 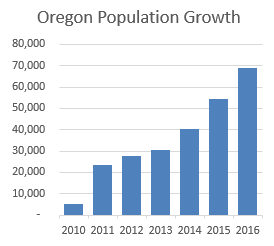 Here's why: Not only is Oregon growing, but we're growing faster than the rest of the country. And more than that -- we're picking up speed. Each year for the last six years, we've added more residents than the year before.

Now, this isn't a done deal. In 2007, some estimates had us on track to win the sixth seat, but the Great Recession that hit in 2008 caused Oregon to slide back. Ultimately, Oregon-6 ranked at #442, seven spots out of the running.

If reapportionment were done today, Oregon-6 would rank #433. And if Oregon grows as fast in the next four years as it has this past year, well, it won't even be close -- with Oregon-6 coming in at #417.

(Thinking about the Electoral College? Sorry, this won't apply until the 2024 election.)

Now, cue the mapmakers! How would you draw a six congressional district map for Oregon?