Pink slips for teachers, a big tax cut for the wealthy

School districts in Oregon have been drawing up plans for staff cuts, in case the Oregon legislature fails to come up with the revenue needed to fill a $1.4 billion state revenue hole. And according to several teachers who spoke during a town hall in Portland this past Saturday, pink slips have already started landing in some schools.

While Oregon schools brace for layoffs, the richest Oregonians wait for a big income tax cut to fall into their laps.

Last week, we learned that Oregon is on course to trigger another personal “kicker” — the automatic income tax cut that kicks in when non-corporate revenue collections exceed the amount forecast two years earlier (in May 2015 in this instance) by 2 percent or more. When that 2 percent threshold is reached, the state spends the full amount of unanticipated revenue in the form of an income tax credit. Right now, state economists are predicting that revenues will exceed the two percent threshold by $70 million. If that prediction holds in September, and if the Oregon legislature does nothing to stop it, the state will spend about $400 million on kicker tax credits at tax time next year.

It looks like the kicker is kicking because some extremely wealthy Oregonians died. While estate tax revenues generally track changes in home sales and stock prices, they are impossible to accurately predict. State economists now project revenue from the estate tax to come in $110 million more — 50 percent greater — than the prediction made in 2015. In other words, if some ultra-rich people had not died, the kicker would not be kicking. 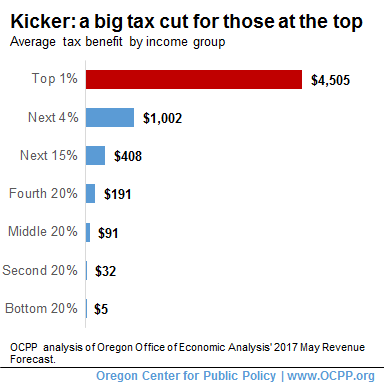 It’s ironic that deaths among the ultra-wealthy are making the kicker kick, because the kicker disproportionately benefits the wealthiest Oregonians. Each person’s income tax (not estate tax) payment for tax year 2016 determines the size of the kicker tax credit they will get in 2018. If the state economists’ current estimates hold true, the typical (median) Oregon taxpayer — one with income in the $30,000-$35,000 range – will get about $85 kicked off their 2017 taxes. The average member of the top 1 percent of earners — those who make at least $368,000 annually — will get a tax cut of about $4,505. 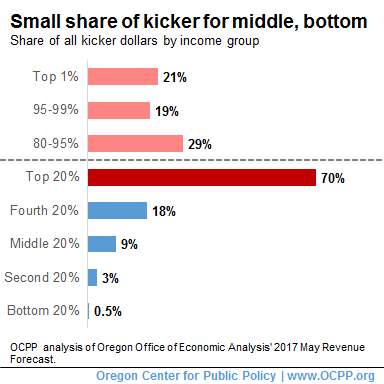 The choice before lawmakers is clear: Suspend the kicker to protect education and other essential services, or allow big tax cuts for the wealthy to go through and risk more pink slips at Oregon schools.