It’s never too late to hope that lawmakers do the right thing. Here at the Oregon Center for Public Policy, we hope lawmakers enact a commercial activities tax that raises game-changing revenue, so Oregon can finally upgrade our schools and essential services. If they take that bold move, the Center hopes they will include an aptly named “CAT Fairness Credit.”

The tax reform plan the Joint Committee on Tax Reform has been discussing has contained several elements: a commercial activities tax (CAT), a credit against the CAT for businesses that pass profits (and losses) through to their owners’ personal income tax forms, and repeal of the corporate income tax (CIT). Hoping to make the plan more attractive to voters, the reform plan includes a new personal income tax bracket and the lowering of some of the rates in other brackets, and an increase in the Oregon Earned Income Tax Credit (EITC). We’ll call this combination of features the “proposed CAT plan.”

Unfortunately, the proposed CAT plan disproportionately benefits higher income households. Taxes go up as a share of income for all income groups except the top 1 percent, who see their taxes decline. They go up most for those in the bottom fifth of the income scale — seven times as much as for those in the top fifth. The top fifth in general, and the top 1 percent in particular, do so well because the repeal of the corporate income tax disproportionately benefits the wealthy. The change in personal income tax rates, while well intentioned, actually gives more benefits to wealthy households than to those at the very bottom of the income ladder.

While the change to the EITC is also well intentioned, this increase wouldn’t help non-working adults such as the disabled and elderly, or working childless adults. Nor is it sufficient for low-income working families to be held fully harmless from the CAT.

The good news is that the CAT plan doesn’t have to be so regressive. The plan could raise just as much revenue while protecting low-income taxpayers if the plan included a CAT Fairness Credit instead of the changes to the personal income tax structure and the expanded EITC. 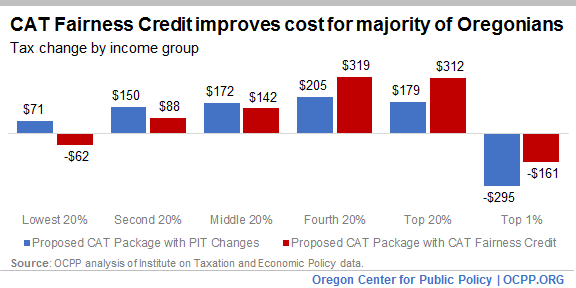 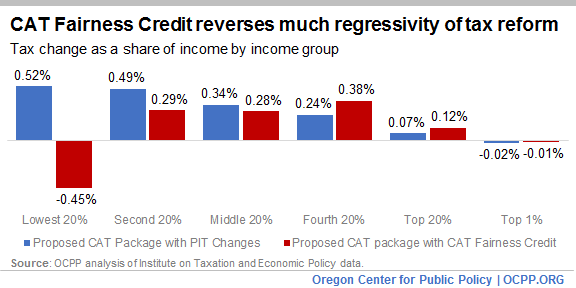 All else being equal, as noted in the charts above, a tax reform package with a CAT Fairness Credit reduces the regressivity of the proposed CAT plan when substituted for the changes to the personal income tax and expanded EITC.

So let’s hope that if lawmakers enact a CAT plan they include the CAT Fairness Credit.