This time, what’s good for Kansas is good for Oregon 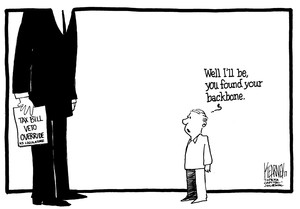 This week, the Kansas legislature finally had enough. On a bipartisan vote, it pulled the plug on massive tax cut experiment that wreaked havoc on the state’s schools, essential services, and finances.

Oregon lawmakers should take note. They should pull the plug on a tax cut of the same ilk as what Kansas just repudiated: preferential treatment for pass-through business income.

In 2013, as part of the so-called “Grand Bargain” special session, Oregon followed the lead of Kansas and granted special tax treatment to owners of businesses that pass through profits to the owners to be taxed under the personal income tax. The proposal failed to pass in the 2013 legislative session, but was brought back to life by then-Governor John Kitzhaber in the special session. Make no mistake: This tax break was mostly a big giveaway for wealthy business owners.

Kansas had already done something similar, albeit more extreme. In 2012, Kansas Governor Sam Brownback persuaded the Kansas legislature to exempt all of the income of a pass-through entity from the state’s personal income tax.

The version adopted by the Oregon legislature allowed pass-through income to be taxed at a lower rate than it otherwise would be under the personal income tax. It was Kansas-lite. Still, this tax break will cost Oregon about $282 million in the upcoming budget period.

This time, what’s good for Kansas is good for Oregon. The Oregon legislature ought to follow the lead of Kansas, and in a bi-partisan fashion repeal the misguided special treatment of pass-through business income.