People pay taxes on gross receipts, so why not businesses?

I’ve heard some folks opposed to enacting a Commercial Activities Tax (CAT) complain that taxing gross receipts, rather than profits, is unfair.

And yet the personal income tax Oregonians pay functions, in large part, like a gross receipts tax.

The big difference is the proposed CAT would be minuscule compared to the income tax we ordinary people currently pay.

The tax on personal income is a tax on receipts without regard to whether the taxpayer had a “profit” — money left over after expenses. Take, for example, two people with identical jobs and income, and who have different expenses, such as rent, student loans, or fuel costs to get to work. One person ended the year deeper in debt than when she started, while the other ended the year with extra money (“profit”) that she could put into a savings account. Yet, each would pay the same tax on their similar receipts of income.

According to the latest report from the Oregon Department of Revenue, the average personal income tax is 6 percent of adjusted gross income.

By contrast, under a recent legislative draft, the most that a business would pay under the CAT would be 0.75 percent on Oregon sales of services above $3 million, plus $250 for the first $3 million in sales. Some businesses would pay less, depending on the type of industry to which they belong. Auto dealers, for example, are retailers and would pay a rate of 0.35 percent on sales above $3 million. 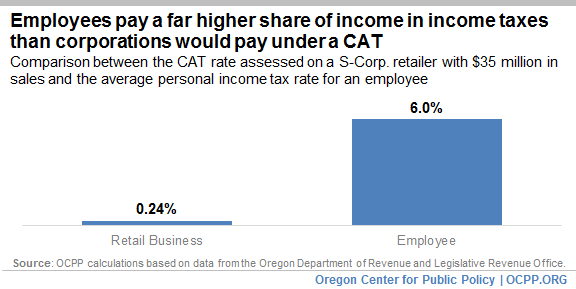 This means, as illustrated in the above graph, an S-corporation retailer with $35 million in sales, such as an auto dealer, would pay just 24 cents on every $100 in sales under the proposed CAT, while the average employee will pay $6.00 on every $100 earned — 25 times as much.

The CAT looks like a pretty damn good deal for businesses when viewed from that perspective.