Public structures and quality of life matter, not state rankings 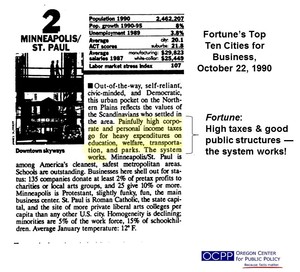 With lawmakers considering an overhaul of how Oregon taxes businesses, it’s a good time to reiterate a point we’ve made many times: When it comes to business climate and Oregon’s economy, the quality of public structures and quality of life matter, not how a state ranks in terms of spending and taxes.

Recently, a reporter tweeted that the Center seemed to be holding inconsistent positions on tax and spending rankings. He accused us of saying that state rankings are irrelevant when it comes to spending, but not when it comes to business taxes. Not so.

We’ve consistently pointed out that rankings on spending and taxes don’t matter.

For example, last year we explained,

How Oregon ranks in terms of revenue collection is not a very helpful metric, though the subject does come up often in political discussions. Such rankings tell us little about whether Oregon raises enough revenue to provide a quality education to all children, maintain roads and bridges in good working order and adequately support all the other public services that improve quality of life and business climate.

It is the adequacy of our tax system, not Oregon’s ranking, that ought to concern policymakers and other Oregonians.

And by rankings on revenue collections, we mean any kind of revenue, including business taxes.

As Oregon lawmakers focus on business tax reform, I hope they stop fretting about rankings and focus on what really matters: raising enough money to have quality public structures that make possible our quality of life and our strong economy. I hope they heed the comments of Mat Ellis, CEO of the tech company Cloudability (PDF), who recently told the Joint Committee on Tax Reform:

I am competing with companies like Google and cities all over the world to retain my highly skilled workforce. A big factor in our favor is the perceived quality of life here in Oregon. Yet when they have children they encounter an underfunded school system combined with a reluctance to consider anything beyond spending cuts to solve the myriad problems. It’s not as if I don’t pay them enough so that they couldn't send their kids to private school. But they do not want to send their kids to private schools. They want to live in a community which adequately invests in education and other critical services.

And that’s not what’s been happening. In response I've lost staff to places like London, Austin, Berlin and Helsinki, drawn by a higher quality of life, which public education is big part of. And that's just so far this year.

The business community has long known that public structures and quality of life, not low taxes, are what matter and what make Oregon a great place for business. One of my favorite slides to show in presentations is a clipping from a 1990 Fortune magazine article that named Minneapolis/St. Paul one of the “Top Ten Cities for Business.” Fortune noted that Minneapolis/St. Paul won second place because of the good public structures and quality of life enabled by high taxes:

The media and Oregon legislators should disregard rankings of spending and taxes. Instead, they should focus on raising enough revenue to create top-notch schools and other public structures that improve quality of life and the economy.

In the not-too-distant future I’d like to be writing and reading that Oregon is an example of how “the system works.”