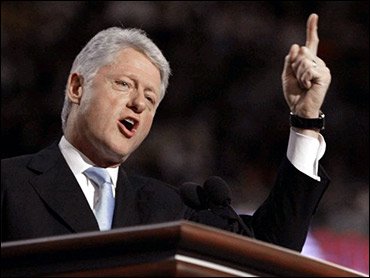 Damn he is good.

Bill Clinton is just plain amazing. The man can take over a room and it does not matter how large that room might be.

Let me tell you, when he is only nine rows away, the energy is truly a force of nature.

The Oregon Delegation sits right behind Iowa, right in front of the podium. We get the full force of any speaker. My hands are sore from the applause.

Clinton’s words, phrases and incredible analysis of the status of the country, the world and the social and political atmosphere should be studied carefully.

“Strength and Wisdom are not opposing values!”

And he followed a series of speakers who, in any other setting, would have made history on their own...

Hillary Clinton’s sense of the future and praise of John Kerry and Bill Clinton had an eloquence, a grace to it. It had, like many of the presentations last night, a sense of hope, a basic statement that we can and will do much better once we see real leadership in the White House, Congress and at all levels of the political spectrum.

The personal got political with comments from Kerry’s shipmate-now minister.

And if I ever hear someone try to characterize Al Gore as stiff, I will remind them of the pointed, clear focus of his comments.

A sports analogy might work here… and since this town is a baseball haven… Despite the fastballs thrown during the last few years, we had a series of homeruns last night from damn near everyone on the roster… and the equivalent of a Grand Slam from Bill Clinton.

Speeches, speeches everywhere. I heard from at least 15 luminaries outside of the convention floor during the course of one day: Military leaders, religious leaders, and of course, political leaders. It will be difficult to absorb all of the phrases and stunning ideas presented so far.

One idea surges to the front: “We are at a crossroads. This is a time of decision and that is recognized by some many people.”

The energy to make that change permeates the air. It is almost thicker than the Boston humidity. Everywhere. Everyone.

And despite their best attempts, even the cynics feel the impact, though they’d like to dismiss it. And they try.

There are phrases that people like to throw around. Reporters and supposed pundits are often guilty of this. They believe it places them and others above the fray. The one that comes to mind right now is: “Preaching to the choir.” It is a way of trying to say that a speaker or group of speakers can’t really convince others so they are only talking to those who already agree with them. For those tossing out the criticism it is a way of saying, we’re tired of showing that people agree with you, we need to see conflict and if we don’t see that conflict we are going to create some if necessary. Baring no creation, we will attack you for saying the same thing to your supporters that you say everywhere else.

Well here’s a clue. The reason some things are said to the choir and to others is because they resonate with both. The reason the choir needs to hear those things is because they need to see support among the pews as well as out on the street. The choir needs to understand where the speaker is coming from and reinforce that with their own personal experience to take it out to the community and create change. The speaker has already seen the reaction and needs to keep the message going while informing the choir about what is working.

And it is not just a matter of repetition or “sticking to the talking points” to simply manipulate people because there is no substance behind the rhetoric. That propaganda approach is used so cynically by some political leaders that it has become a regular segment on the Daily Show with Jon Stewart. It is shown clearly, forcefully in “Outfoxed”.

Preaching to choir… you better.

There will be people throughout the country nodding their heads and some shouting “Amen” when the speakers come to the various podiums this week. The only difference we will see between the members of the choir is how large that choir loft is: a number of the soloists are present in Boston… the harmony is in Atlanta, Clarksdale, Prairie View, Colorado Springs, Sikeston, Watertown, Cleveland, Harrisburg, Little Rock, Oakland, Twin Falls, Jacksonville, Asheville, St. Peter, Tuscon, Macon, Richmond, Spooner, Port Townsend, Ogden and Portland.

That is one helluva choir.