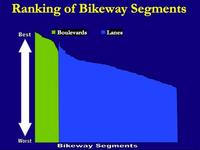 One of the subtle problems in the misunderstanding about the City of Portland’s recent stormwater and sewer investments is the distinction between bike lanes, bicycle boulevards, and Green Streets.

People are complaining about sewer monies funding bike lanes. Yet the investments are targeted for sewer and stormwater work to create Green Streets -- which strategically overlap with bike boulevards (see previous column).

What the heck is a bike boulevard? In short, a bike boulevard is a neighborhood street optimized for people walking and biking, where speeding cut-through car traffic is discouraged. Think Southeast Clinton, Southeast Harrison, or Northeast Tillamook.

A bit of history. For decades, supporters of providing healthy, safe places for people to bike around town advocated for bike lanes on our major streets. These experienced cyclists – people who will bike in heavy car traffic, who will ride on streets like Barbur, Burnside, and MLK, Jr. – called for setting aside a few feet so people on bikes and people in cars wouldn’t have to compete for the same space. Our major thoroughfares, the fastest and most direct ways to get around town, should safely convey people in various modes of transport.

About a decade ago, cycling advocates revisited our priorities. Here in Portland, we’d doubled the number of people biking regularly, and we were trying to figure out how to increase numbers even further. Having met some of the needs of existing cyclists, we refocused on infrequent cyclists – roughly sixty percent of Portlanders.

In survey after survey, the number one barrier to biking is concern about safety, specifically safety around car traffic. Parents won’t let their kids ride to their friend’s home, people who haven’t biked in years can’t imagine biking on Fremont or Broadway (the streets they drive on), and people simply don’t experience the joy they felt when they first rode a bike, in part because there aren’t quality, low-speed, low-car-traffic routes to get to the places people shop, work, and play.

Thus the bicycle boulevard. In a built up city, it’s very difficult to find space to create a system of new trails like the Springwater on the Willamette – trails where everyone feels safe biking and walking, set away from cars. The low-cost solution? Retrofit a few streets in our comprehensive grid network, and make them places where people can enjoy walking, biking, and playing in the street. The best boulevards discourage speeding cut-through car traffic, while realigning stop signs so bicyclists aren’t directed to stop every other block. Travel on Southeast Ankeny for an idea, or Southeast Lincoln.

Meanwhile, sewer and stormwater engineers were rethinking how we keep pollutants and feces out of the Willamette, and how we most efficiently clean our water. Thus, the development of bioswales and other green infrastructure, supplementing the expensive pipe-and-process approach of the past. Instead of piping runoff to a treatment plant or directly into the river, plants and soil store and filter the runoff, keeping our river and water clean. As most of our runoff comes from streets, the city strategically created its Green Streets program in 2007.

And so we come to today. Green Streets and bike boulevards are wonderful ideas – the sort of long-term investments that will benefit the city and ratepayers for decades to come. Yet finding the up-front funding for them has been a challenge. The small investment made by the City Council this spring was a first step.

Back (finally!) to the terminology problem - bike lanes vs. bike boulevards vs. Green Streets. I think many Portlanders perceive bike lanes as a bit of paint on a busy street for the hard-core cyclist – money spent on someone who isn’t them, someone they can’t even identify with. In contrast, if people understand the complex and strategic nature of what the city is doing, Green Streets and bike boulevards can be seen as amenities for everyone who lives in a neighborhood, who drinks water, or who wants kids and adults to feel safe in public space.

Oregonians will continue exploring how best to invest in our stormwater, sewer, and transportation systems to efficiently create clean water, healthy watersheds, safe transportation choices, and great neighborhoods. As we do so, it is critical we're precise in our language, allowing us to accurately understand the decisions before us.

More about Bike Boulevards. More about Green Streets. More about the above chart, ranking boulevards as more pleasant than most bike lanes.