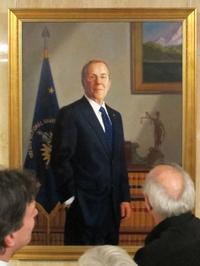 Today the Oregon Capitol Foundation joined legislative leaders to unveil the official portrait of Governor Kulongoski outside the Senate chamber.

It was a chance to appreciate Oregon artists, several of whom attended, including Kulongoski’s portraitist Eduardo Fernandez with his family, Governor Roberts’ portraitist Aimee Erickson, Portland impressionist and realist Thomas Kitts, and Portland realist Jeremy Dubow.

But was mainly a chance to reflect on Kulongoski’s legacy. Roughly two hundred people attended, including four governors and a collection of staff, media, elected officials, lobbyists, and family members. Those who spoke reflected on Kulongoski’s four decades of public service, from his days as a state legislator, Insurance Commissioner, Attorney General, and Oregon Supreme Court Justice, to his past eight years as Oregon’s 36th governor.

Known as a quiet governor (both a strength and a weakness), Governor Kulongoski has a long list of accomplishments after eight years. Harry Esteve summarized the work in a wonderful article in The Oregonian January 1st:

On [Kulongoski’s] watch, the state gave health coverage to tens of thousands of low-income children, doubled financial aid spending for needy college students, all but ended a scourge of meth labs, gained worldwide recognition as a hot spot for solar companies, opened a spate of new parks, and put one of its environmental gems, the Metolius River, off-limits to developers.

Kulongoski will go down as the governor who took the first steps to hold down the exploding costs of public employee retirement pay, and who twice froze state wages, in both cases defying the unions that helped bring him to power.

Kulongoski pushed for cleaner energy sources, oversaw expanded rights for same-sex couples, and worked to increase spending on transportation. He also worked hard to support the Oregon National Guard, and once ate for a week using food bought with food stamps, garnering national media attention. His portrait reflects his passions and service – from the National Guard flag to a painting-in-painting of Mount Hood.

There are huge unfinished tasks - reforming higher education, stabilizing the state budget for the long term, and addressing the climate crisis at the scale science demands. And as Kulongoski noted, his list of accomplishments (and unfinished tasks) are shared by the last four legislatures, which had a mix of leaders from both parties, and by the Governor’s staff and state agency staff and commissioners. The Governor choked up when thanking his wife, Mary Oberst, for her lifetime of support and serving as his conscience. They all deserve credit for the progress made.

Yet today is a day to say thank you, Governor Theodore R. Kulongoski, for your four decades of service to Oregon. Your dedication to improving this state we call home is an inspiration.