Importance of the Union Vote 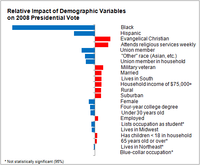 The protests in Wisconsin continue on after nearly two weeks, and the governor there, Scott Walker, continues to stake his term on the issue of collective bargaining. All of this is predicated on the idea that unions are critical to the Democratic Party, and so Nate Silver wondered: well, are they? His answer (yes) is fascinating, but I'd argue that it understates the case with respect to statewide elections. We'll consider that in a moment.

First, let's look at Nate's analysis. Poring through a huge dataset from the National Annenberg Election Survey, he tried to isolate the variables and determine the impact of separate effects on voting preference:

His findings? The three most important constellations of variables were race (overwhelmingly the most important), followed by religion and union membership. Nate summarizes the importance of unions:

Specifically, 64 percent of union members in the Annenberg data set voted for Barack Obama. By contrast, if these same voters were not members of unions but every other demographic characteristic were held constant, the analysis predicts that 52 percent of them would have voted for Mr. Obama instead. Thus, the marginal impact of being a union member on the likelihood on voting for Mr. Obama was 12 percentage points (64 percent less 52 percent) on average.... There was also an effect from voters who were not members of a union themselves, but had someone else in their household who was (these voters are designated as “union member in household” in the chart). These respondents, which represent about 5 percent of the Annenberg data set, were between 8 and 9 percentage points more likely to vote for Mr. Obama than they otherwise would be. Combined, the union voters and the union-household voters improved Mr. Obama’s share of the vote by 1.7 percentage points, according to the model.

In his careful way, he continues on to describe why this probably understates the effect, which, in a two-candidate race, would telescope to a 4.8% margin between the two candidates. And 4.8% is, in elective terms, massive.

Still, one imagines the effect on a race for statewide office--particularly governor--would be quite a bit larger among members of public unions. Because, while Democrats are generally supportive of working people, the connection between a president and a school teacher is quite weak. Not so between a governor and a school teacher. Republicans have done more than target public unions; they've demonized the workers who comprise them. This was precisely Walker's calculation when he triggered the current Wisconsin war.

In November, five states elected Democratic governors by margins smaller than Nate's 4.8%: Oregon, Minnesota, Illinois, Vermont, and Connecticut. In all of them, state workers have the right to collectively bargain. This year, seven states have proposals to weaken public unions and Republicans in two of these (Wisconsin and Ohio) had relatively close gubernatorial wins. The effort to roll back union rights is designed to politically cripple one of the strongest, well-organized, and wealthy opponents of Republican candidates.

Of course, gaming the system is as old as organizing. Republicans have had a string of wins lately, notably in Citizens United. They're trying to cash in on yet another, targeting their most powerful remaining foe. Preventing state workers from collectively bargaining and making it more difficult for them to collect and spend money would be a massive bonanza at the statewide level. And that's why the Wisconsin capitol is still packed with people after two weeks.