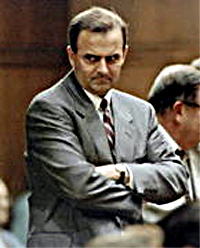 In the world of high-end salons and spas, image and service are very important. After all, they're selling style, relaxation, tranquility, and the personal touch.

Which makes it so very strange that Dosha Salon Spa would hire rabid anti-union pitbull Bob Tiernan as their "business consultant". If there's one person on this planet that doesn't communicate style and tranquility, it's Bob Tiernan.

The NW Labor Press has the backstory. Back in mid-March, Don McIntosh reported on an effort to unionize salon and spa staff:

Voorhies is part of the third committee of Dosha workers to work on the union campaign at Dosha in the last 18 months. Two previous efforts fizzled when committee members quit or were fired. In late January, Voorhies and co-workers began gathering signatures on official union authorization cards. They kept going until they reached a supermajority of Dosha workers.

After the company refused to recognize the union, so the NRLB set an election for the end of March. And then, by a vote of 79 to 66, the Dosha workers voted to form a union and be represented by CWA Local 7901.

Judging by the issues they raised, they won't be asking for the moon. Guaranteed pension? Fully-paid full-family health care? No, Dosha workers expressed more modest aims, like direct deposit of their paycheck and an end to having to pay $150 for their own training on Aveda products. [Dosha co-owner Ray Motameni is also co-owner of the Aveda Institute Portland where the training takes place.]

Shortly after the vote, the Oregon AFL-CIO called on its supporters patronize "your brothers and sisters at Dosha!"

But now, there's the news that Dosha has hired Bob Tiernan - presumably to break the union. McIntosh reported on Tiernan's comments at a mandatory employee meeting held in late April:

"We want you to know that we are going to run this company as if there's no union here," Tiernan says in the recording. "We're going to deal with the union and we're going to negotiate in good faith, as the law requires us to do, but we're going to pretend like they're not here." ...

"[Owners Ray and Melissa Motameni] want the freedom to run their business," Tiernan said, "and they're not to give it up to the union. The union's going to want to run this business, and I've got news for you: Ray is not going to allow that."

Now, I live just a short walk from the Southeast Hawthorne location. And in years past, I've been known to buy a gift certificate for my wife as a (last-minute) gift. And now that Dosha is unionized, I'll probably do so again someday soon.

But, Ray and Melissa Motameni, if you've got Bob Tiernan roaming around barking at your staff like a rabid pitbull, that's not going to be good for business. No one wants to get a spa treatment at a place that's associated with a raging anger-management failure.