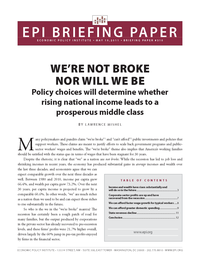 Claims that as a nation ‘we’ are broke have taken enough space in recent public discourse to seem beyond question, although the facts prove the opposite. In a new briefing paper, We’re Not Broke Nor Will We Be, Larry Mishel of the Economic Policy Institute (EPI) debunks the assertion that our nation is going broke.

In contrast, Mishel's paper shows the economy has seen steady growth in income and wealth over the past 30 years and will see similar growth in the next 30. Nevertheless, while these claims have little in the way of truth, politicians and pundits have successfully used them to justify efforts to scale back government programs and public-sector and private-sector workers’ wages and benefits (we've seen similar false claims here in Oregon).

We're Not Broke also points out how wealth and wage disparities have widened significantly. The middle class as a whole has not gained wealth or received much of the income gains of the past 30 years. Between 1980 and 2009 the typical (median) worker saw hourly wages grow by just 11.2% while income per worker grew by 59%. Since 1979, the top 10% of households have received almost two-third of all the income gains, with the top 1% claiming 38.7% of all the gains.

If the cries to lower public investments and halt employee wage increases are heeded, the middle class will surely be left further behind even as our nation enjoys substantial income growth in the years ahead.

Read We’re Not Broke Nor Will We Be (PDF version here ) and discuss.