...a lot is riding on tomorrow morning's vote: $30 million, 2000 estimated total jobs created, and a potential "living laboratory" to showcase Portland's leadership in green building and design. To also include on that list may very well be Sam Adams' legacy as Portland's mayor. 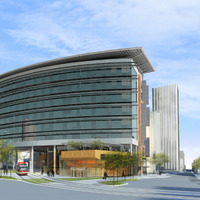 In an interview with Blue Oregon last June, Mayor Sam Adams spoke of his plans to build the Oregon Sustainability Center- the "largest, triple-zero, living building that will generate its own electricity, water, and deal with waste on-site." The project had yet to be approved, however, and the City Council is scheduled to decide the future of the Center at tomorrow's City Council meeting. This vote could be interpreted as a gauge of Mayor Adams' influence in his waning days as Portland's mayor, with the Sustainability Center perhaps serving as Adams' final attempt to leave a lasting legacy on the city of Portland.

In theory, the Oregon Sustainability Center makes perfect sense. Portland has established itself as a leader in regards to green technology and urban design, and- depending on your source- leads the country in most LEED certified buildings per capita, with 127. The Center would serve, as Mayor Adams described it, as a "living laboratory" putting all of the best practices of green design and technology under one roof, showcasing all of the innovative practices of Portland's sustainable design and construction industry. Besides helping create this "living building", the same firms responsible for making the Oregon Sustainability Center a reality would also serve as the Center's clients, renting out office space once construction of the Center is completed.

However, there is also a strong case against the construction of the Oregon Sustainability Center as well. The first argument is that by constructing from scratch, the Center violates one of the very first rules about green construction, which is that "the most sustainable building is one that all ready exists." Besides demanding that all new construction of city-owned buildings meet LEED Gold standards, the City of Portland's current Green Building Policy requires that all existing city-owned buildings meet LEED Silver standards. There is no question that by being a "living building," the standards would far surpass those required to be certified LEED Gold. And while it would be impressive for the Oregon Sustainability Center to generate waste, electricity, and manage its own waste- thus resulting in an environmental impact of virtually nil throughout the building's lifetime- what about the carbon footprint of the actual construction of the building? Will carbon offsets be purchased to compensate for construction on what is currently a grass and gravel lot (the site of a former Tiki lounge near Portland State), and not even a heat-reflecting paved parking lot?

Shawn Uhlman, Public Affairs Manager for Portland Development Commission, responded to questions regarding the Center's carbon footprint: "The Center needs to be looked at in a broader scope. The Center is not intended to be a regular office building, but is intended to meet the challenges of the Living Building Challenge from day one. There is a commitment to getting construction products from the "red list" coming from within a certain radius. For example, brackets for the solar panels will come from Joseph and other parts coming from Bend. Clearly, these products couldn't be exported to a similar building in Phoenix, but the skills and wisdom of such companies as Gerding Edlen and SERA Architects could be."

Another concern which may become an obstacle for an easy "yes" vote by the City Council is the Center's price-tag and complex funding mechanisms. The Oregon Sustainability Center is projected to cost nearly $62 million, which is fifteen to twenty percent more than similar institutional buildings such as the Port of Portland's new headquarters at the Portland Airport. The advanced technical nature of the Sustainability Center- which will, again, reduce costs over the long-term- demand an initial investment that are not required from similar buildings, even those that meet LEED Gold standards. Of that price-tag, the council will vote tomorrow to have the Portland Development Commission foot fifty percent of the bill with the Oregon University System funding the other half. The $30 million that the city would be committed to construct the Sustainability Center is a far cry from the "sticker shock" of the $548 school construction bond rejected by Portland voters this past spring, but some Portland residents may question the need to invest this substantial amount of money into one single building. (Even if the economic benefits would result in increased contracts for Portland's sustainability design and construction sector. Job creation estimates provided by Uhlman include 780 direct and indirect jobs created during the Center's construction with a $100 million economic impact.) City staffers are scheduled to meet with the Oregon legislature the day after the council vote to address funding concerns, with a final funding request submitted to the 2012 Legislature.

"It should be remembered that all though the Center is to be the first building of this kind, it is intended to be replicated. It is intended to be the first of many," said Uhlman. "As the practices incorproated by the Center are replicated, it will drive down the costs. Just as when LEED started, it demanded a premium price. Now its almost standard to incorproate lEED into all new building design."

So, how do the tea leaves look for tomorrow's council vote? There are at least two solid votes that can be counted on in favor of the Sustainability Center, the mayor's and outgoing commissioner Randy Leonard who has been a supporter of the Center up to this point and, according to a staffer, there is nothing to indicate that his support hasn't changed any. As for commissioners Saltzman, Fish, and Fritz, according to the Mercury's Blogtown it is more difficult to discern how they might vote. Saltzman has concerns about how much it will cost to move the Bureau of Planning and Sustainability into the new digs. Fritz's past votes include an opposing vote to retrofit PGE Park into an acceptable stadium for major-league soccer. And Commissioner's Staff is still reviewing the roll-out provided by Mayor Adams last week in preparation for tomorrow's vote.

Clearly a lot is riding on tomorrow morning's vote: $30 million, 2000 estimated total jobs created, and a potential "living laboratory" to showcase Portland's leadership in green building and design. To also include on that list may very well be Sam Adams' legacy as Portland's mayor.

UPDATE: The campaigns of the current leading mayoral candidates were contacted to get their respective stances were on the Oregon Sustainability Center.

Jefferson Smith replied with the following: "Oregon and Portland ought to be the global leader in sustainability design and technology. And there should be a landmark building which provides a center for this leadership. And if it pencils out on paper and with the legislature, I'm all for it."

Due to a death in the family, Charlie Hales was unavailable to provide a response.