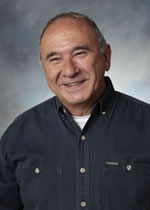 Oregon House District 30 is a mix of urban and rural Washington County, and should lean slightly Democratic. In 2010, Republican Shawn Lindsay won the seat. The big scuttle I've heard on Lindsay is that he threw his colleagues under the bus during the redistricting process in order to try and make his district more favorable for his own reelection. This essentially fits in with what I already know of the guy, who used his Twitter account to express joy in 2010 when opponent David Edwards was forced to drop out due to his wife's illness. This cycle, when opponent Adriana Canas dropped out of the race, Lindsay failed once again to show any grace, grousing that Canas took "a negative shot" at him upon her exit.

Basically, Lindsay is a jackass.

Fortunately, the Oregon House Democrats have found a solid opponent to run against Lindsay: Joe Gallegos.

Gallegos was born in Texas, but moved to Oregon when he was 17. A veteran, Gallegos served in the US Air Force, and then in the Oregon Air National Guard during the Vietnam War years. He later worked his way through school, eventually gaining a Masters in Social Work from Portland State University. Later, Gallegos obtained a doctorate in cultural perspectives in mental health. "I recognized that the Latino community needed advocacy", Gallegos told me in our interview. "This is what motivated my doctorate. I wanted the tools to do advocacy."

Gallegos' impressive background extends deeply into academics and the Latino/Native American communities, running parallel tracks. Notably, Gallegos spent 20 years on the board of Catholic Charities, helping to launch the low income migrant housing initiative. He's also specialized in gerontology for the Latino Community, working on several studies around Latino aging. Gallegos is also a consultant to several Latino organizations and serves on the Advisory Council for the Latino Network Leadership Project.

Gallegos says he would bring something much different than Lindsay to the legislature, "I've had more advocacy experience with minority and elderly groups, " Gallegos said. "I've also done advocacy for low income housing. And I've had a successful career in education." Gallegos also stated the obvious difference, "He's (Lindsay) conservative. I'm not. I would look at issues very critically."

As a state representative, said that he'd like to be a strong advocate for changes and support for higher education as well as an advocate for implementation of Governor Kitzhaber's healthcare proposal.