It's time to take a bold stand on guns

It is time for our society to take much bolder steps to make ourselves safer from gun violence. To me this means creating much stricter gun laws and enforcing them. 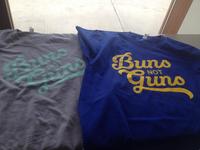 How bad does something have to get before we take bold stands as a society to change it? As humans, one would think that we function on a higher plane. When we see something is going badly, we do something to make sure it doesn't get worse - right? Or, at least that's how I hope we function. When it comes to preventative medicine - we often take precautions - but when it comes to guns in the United States today we are not thinking and acting clearly. It's time for our society to take much bolder steps to make ourselves safer from gun violence and to me this means creating much stricter gun laws and enforcing them.

I'm not a gun-owner. I never have been and I never will be. I don't think I've ever shot a real gun, maybe an air rifle. I haven't seen anyone get shot nor has anyone in my family ever been shot. I don't want anyone to get shot.

People in the US want stricter gun legislation now. I believe the President and Vice President and some members of Congress are listening. But it's going to take a bold stance from a lot of people to make a change. We've gotten ourselves into a pickle on this one - probably letting things get terrible before they can get better. I wonder what it would take for us as a society to start pushing back against what we know is not good for us in the long run. Soda. Fast Food. Poisoning our air and water. Buying and driving SUVs. We all know that we're cooking the planet, but are we taking the crucial steps necessary to change course? Most who are seriously looking at the issue would say no, we're not.

I appreciate those in power who have been leading the way to a better place on this and other issues. State Senator Ginny Burdick has been leading the charge in Oregon, but where are the rest of the Oregon House and Senate?? - background checks for all; limiting access to assault weapons and other related legislation is front and center nationally and it should be in our state, too. With Democrats holding majorities in our House, Senate and Governorship, you'd think progressive legislation would be flying off the shelves and into law. Salem, most of us want stricter gun laws - it is a good thing, it is a "make the world safer thing". Please, if you can't make it happen in the legislature, bring it to a public vote and let us decide.

One of my favorite political writers, Mark Morford of the San Fran Chronicle in this article writes:

"The NRA, like any conservative group, reviles change. The NRA exists solely to enflame fear of the unknown, fear of Other, championing only ignorance and childish anxiety about the world. Their membership depends entirely on a lousy educational system and a visceral hatred of nuance. After all, the less intelligent and informed you are, the more dangerous the world appears, and the more you will desire a deadly weapon to compensate for what you lack in compassion and perspective. What, you calling me stupid? You calling me ignorant and racist and violent? Say it to my Glock."

Yes, we're afraid of those who have guns and the NRA. I've been wanting to write this article for months, but worried that I would get targeted personally for coming out on this issue. To be honest, I'm terrified. Guns kill people. Bullets kill people. People kill people with guns and bullets.

My answer to all of this would be for our politicians to come up with the strictest possible gun control legislation package they can imagine - and I'm glad to be a part of whatever committee wants to draft such a law.

Michael Moore is asking everyone to watch Bowling for Columbine together in groups on Saturday night and he will then lead a national discussion sponsored by MoveOn.org

To end, I'll just say, if you haven't listened to the recent This American Life about Harper High School in Chicago, please give it a listen. There are two parts - part 1 and part 2. Within they talk about how gangs buy bags of guns and then distribute them around a neighborhood. It's bad out there. Let's do something about it. Let's be bold and turn the tide against gun violence by getting rid of easy access to guns. Feel free to share your ideas about how to accomplish this below. What are your recommendations?