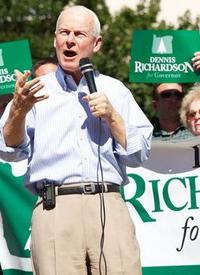 So, who is this guy? He's a father of nine, a veteran, and a small-town lawyer -- all facets of his life he'll surely rely on for his image. But mostly, he's a "Get off my lawn!" right-wing crank - and one that has no respect for the public.

For starters, he's the Spam King of Oregon -- having violated the privacy of tens of thousands of Oregonians by insisting that state agencies turn over emails for clients and constituents who have received public services. As if getting a hunting license or being a health care worker means you should get spammed by a politician.

Spamming the world is OK, but don't you dare invite children to come to the capitol to lobby for school funding. That's on par with totaliarian dictatorship, he says.

If you're going to keep the kids in school, it makes sense - Richardson says - to arm the teachers in those schools. Nothing could possibly go wrong.

And don't forget the time he proposed shipping Oregon prisoners to China.

Richardson didn't seem to have very much fun during this spring's legislative session. From the Statesman-Journal's Peter Wong:

Richardson accused lawmakers and the governor of failing to pass legislation to benefit the economy, pare public-pension obligations, and resolve a deadlock over Oregon’s federal forests.

“My blood boils when I think of how we just wasted six months of precious time and millions of taxpayers’ dollars on the 2013 session,” Richardson wrote. ...

So, with all that crankiness going on, can he pull it off? Well, he's getting help from some deep pockets. The O's Christian Gaston notes that he's got the support of Stimson Lumber CEO Andrew Miller (the "King of Clackistan").